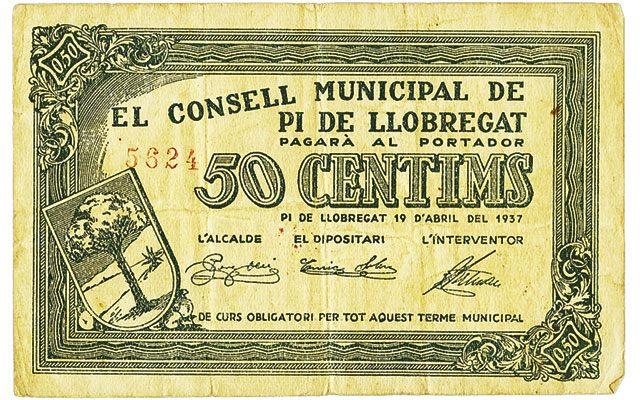 This 50-centime note issued in 1937 is one of many emergency notes issued by towns and villages during the Spanish Civil War.

One of my newest areas of interest is in the emergency notes that were issued by the towns and villages of Spain during the Spanish Civil War.

The Spanish Civil War, which raged from mid-1936 until April 1939 on the eve of World War II, was a military revolt led by conservative elements known as the Nationalists against the legally elected central government whose supporters were known as the Republicans.

The Nationalists were generally conservatives composed of the military, Catholic clergy, monarchists, businessmen and landowners. The Republicans tended to be from the more liberal elements of Spanish society including landless peasants, intellectuals, urban workers, and a mixed bag of political entities including anarchists and various socialist and communist groups.

Simmering opposition to the Republican government erupted into open revolt in July 1936, first in Spanish Morocco and eventually in Spain itself. Because of the political views of the two sides, the Nationalists were supported by fascist Italy and Nazi Germany, while the Republicans were supported by the Soviet Union and a number of international brigade “foreign volunteers.”

Over the course of the next three years, the Nationalists, under Gen. Francisco Franco, slowly gained control of more of the country until Republican forces finally surrendered following the fall of Madrid in March 1939. Franco would remain in power until his death in 1975.

One of the natural outgrowths of such a conflict was the disappearance of all types of coins from circulation. When the civil war began, the Republican government had been in the process of withdrawing silver coins of the monarchy from circulation and replacing them primarily with base metal versions.

Facing the uncertainties of war, the general population also started hoarding coins and withdrawing them from circulation. As a result, many municipalities and other issuers issued small notes as a means of making change, needed to continue normal commerce.

Literally thousands of different notes are known that were issued during the conflict. Most were valued at 1 peseta or its common fractional denominations. I personally like to collect circulated notes, as they have a story to tell.

These notes are usually budget friendly and are fun to research. The standard reference is Local Paper Money Issued During the Spanish Civil War by Kenneth Graeber. It is available from the International Bank Note Society.