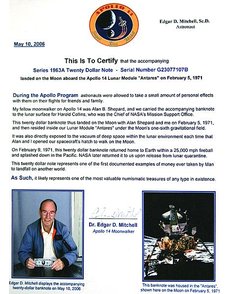 This letter, signed by Apollo 14 astronaut Edgar D. Mitchell, certifies the Series 1963A $20 FRN was aboard the Lunar Module Antares with Mitchell and fellow astronaut Alan B. Shepard Jr. A photo of Mitchell holding the note and one of the Antares are printed on the letter. 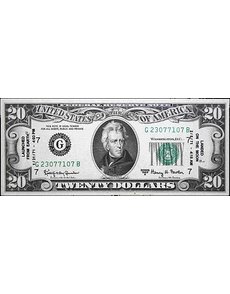 Series 1963A $20 Federal Reserve note is stamped with Apollo 14’s launch date and time and lunar landing date and time. 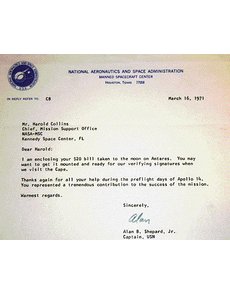 This letter from Apollo 14 astronaut Alan B. Shepard Jr. to Harold Collins, chief of NASA’s Mission Support Office, confirms the Series 1963A $20 FRN flew on the Apollo 14 mission and landed on the Moon.

All images courtesy of Bart Inc.

On March 6 a collector from Los Angeles County, Calif., purchased, along with written documentation, a Series 1963A $20 Federal Reserve note that flew on Apollo 14, landed on the Moon and returned to Earth. The price was an “undisclosed amount well into six figures.”

The note and the documents are in a frame and were offered by paper money dealer Fred Bart of Bart Inc. of Michigan. Bart said the collector who purchased the items wished to remain anonymous.

Bart did say this is the first “space flown” piece of memorabilia the new owner has ever purchased and that the buyer is very happy with his purchase.

Apollo 14 was the fourth manned lunar landing mission and the third successful one (an explosion aboard the Apollo 13 service module prevented completion of the landing).

When asked about the initial asking price of $495,000, Bart said that establishing a value for such an important space relic is hardly easy. He said the initial eBay listing was “priced rather aggressively and the actual value is closer to 50 percent of the listing price. It seems as though everyone asks ‘what’s it worth?’ and the truth is more like $250,000 to $300,000 than the price shown on eBay,” he said before the note was sold to its new owner.

“This permits a buyer, who is happy with the full advertised price, to buy the item immediately,” Bart said. “It also allows for negotiation. In fact, eBay provides the software to automatically accept offers above a certain level as well as reject offers below a certain level.”

Bart describes the framed note as a “space relic” with “impeccable documentation from the National Aeronautics and Space Administration (NASA) and the provenance is beyond question.”

Bart recently purchased the memorabilia after losing an attempt to buy it several years ago. He said when the former owner offered the item in 2006, he and several other prospective buyers responded to the request for sealed bids.

“Recognizing the importance of the note (and particularly because of the ‘bullet-proof’ documentation), our firm tendered a bid of $100,000 for it. Missing the opportunity ranks highest among disappointments during our 30 years in business,” Bart said of the 2006 effort to purchase the memorabilia. “We later learned that two other bidders stood between ourselves and the successful buyer. We managed to get word to the buyer that should he ever elect to sell, BART, Inc. would appreciate the chance to purchase it.” The firm recently was afforded the opportunity to buy the note and other memorabilia, which it exercised.

According to Bart, “Space-flown items are scarce, but not unheard of, with patches, maps, flags, stationery, pens, etc. encountered, albeit infrequently. Many purported space relics have utterly zero documentation to support their claim — this piece, on the contrary, is teeming with documentation. Flown currency is extremely rare.”

The items are matted and framed under UV glass “to the highest archival and museum standards,” according to Bart. The overall dimensions of the frame are approximately 19 inches wide by 26 inches tall.

Within the frame are three of the four items that were in the purchase:

One of the items is a certificate of authenticity signed by Edgar D. Mitchell — one of two astronauts to walk on the lunar surface during the mission — with a photograph of him holding the actual note, and also listing the serial number. The note is on stationery with the patch of Apollo 14 and the name of Edgar D. Mitchell, Sc. D., Astronaut.

The certificate reads, in full:

“During the Apollo Program astronauts were allowed to take a small amount of personal effects with them on their flights for friends and family.

“My fellow moonwalker on Apollo 14 was Alan B. Shepard and we carried the accompanying banknote to the lunar surface for Harold Collins, who was the Chief of NASA’s Mission Support Office.

“This twenty dollar banknote thus landed on the Moon with Alan Shepard and me on February 5, 1971, and then resided in the Lunar Module ‘Antares’ under the Moon’s one-sixth gravitational field.

“It was also directly exposed to the vacuum of deep space within the lunar environment each time that Alan and I opened our spacecraft’s hatch to walk on the Moon.

“On February 9, 1971, this twenty dollar banknote returned home to Earth within a 25,000 mph fireball and splashed down in the Pacific. NASA later returned it to us upon release from quarantine.

Also among the items offered is a letter from Alan B. Shepard Jr. mission commander and the first American in space (in the Mercury program), on NASA letterhead, dated March 16, 1971, addressed to Harold Collins, Chief, Mission Support Office, NASA-MSC, Kennedy Space Center, FL.

The letter reads in full:

“I am enclosing your $20 bill taken to the moon on Antares. You may want to get it mounted and ready for our verifying signatures when we visit the Cape. Thanks again for all of your help during the preflight days of Apollo 14. You represented a tremendous contribution to the success of the mission.

On the back of the frame, in a custom pocket, is a document signed by Cmdr. Alan B. Shepard Jr., Command Module Pilot Stuart A. Roosa and Lunar Module Pilot Edgar D. Mitchell.

The document is an additional letter of authenticity signed by all three astronauts on the Apollo 14 mission, executed in calligraphy, and reads in full:

“It is then personally signed by: