Some notes in Mint-BEP Coin and Currency set not as 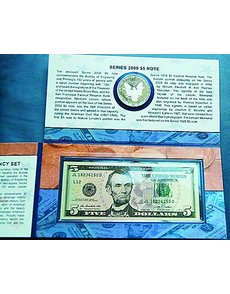 The Series $5 Federal Reserve note contained in this 2012 Making American History Coinage and Currency set has the serial number ending, instead of beginning, with the digits 150 for the Bureau of Engraving and Printing’s 150th anniversary.

Some of the 2012 Making American History Coinage and Currency sets being received by collectors contain Series 2009 $5 Federal Reserve notes whose serial numbers don’t begin with the intended “150.”

One collecting couple, Gary and Barbara Wirth, reported to Coin World Aug. 21 that the note in the set they received does have 150 in sequence in the serial number, but at the end, not at the beginning. The serial number on their note reads JL 18236150 D.

Another collector reported the note in the set he received doesn’t have the number 150 anywhere in the serial number.

U.S. Mint officials were not able to provide Coin World with answers before press time Aug. 24 about the packaging errors and why the BEP supplied the Mint with notes that don’t meet the criteria for the product.

Coin World also asked Mint officials how the notes are procured and received from the BEP, where the notes are received, who produced the packaging, where the sets are being assembled and by whom.

The set is a joint product of the U.S. Mint and Bureau of Engraving and Printing, but is sold by the Mint. The choice of notes for inclusion in the set, those with serial numbers beginning with 150, is intended to commemorate the BEP’s 150th anniversary in 2012.

The L in the two-letter prefix of each note’s serial number designates the notes were printed for the Federal Reserve Bank of San Francisco.

As of Aug. 20, the U.S. Mint had recorded sales of 30,899 of the initial 50,000 sets ordered produced. The product has a capacity of 100,000 sets based on the availability of the notes from the BEP beginning with 150, but U.S. Mint officials indicate the edition ceiling would likely be no more than 97,000 sets, based on expected general returns and damaged product. ¦