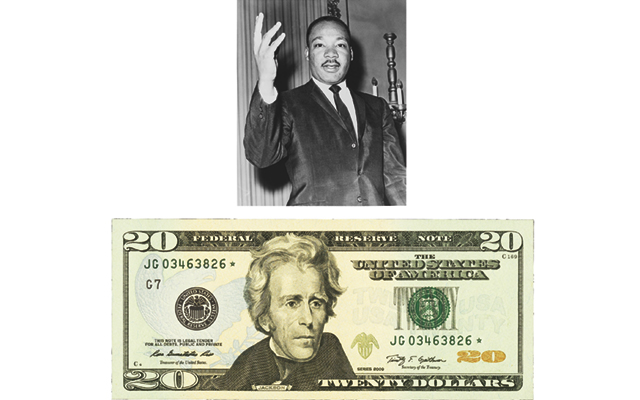 Should a portrait of Martin Luther King Jr. replace the existing portrait of Andrew Jackson now seen on the $20 Federal Reserve notes?

Conor Friedersdorf writes about it in The Atlantic magazine. The article was posted on its website June 12.

Friedersdorf argues regarding imagery on paper money that “the lack of diversity in this highly symbolic realm is objectionable, and improving matters would seem to be very easy.”

He observes that Washington, Jefferson, Lincoln, Hamilton, and Franklin were “arguably indispensable to the nation in its struggle to realize the promise of its founding ideals. King meets that standard.”

But in his opinion Jackson and Grant do not. How did he arrive at his opinion? He asked himself the question: “Was either particularly instrumental in genocidal acts?”

To read the article on The Atlantic website, visit www.theatlantic.com/.

In his article, Friedersdorf references Jillian Keenan’s article on the same topic posted on Slate.com March 3, 2014.

Keenan cites “the Indian Removal Act and the Trail of Tears, Andrew Jackson’s campaigns to force at least 46,000 Cherokees, Choctaws, Muscogee-Creeks, Chickasaws, and Seminoles off their ancestral lands” in support of her opinion that “Andrew Jackson engineered a genocide. He shouldn’t be on our currency.”

Keenan writes that King belongs on U.S. paper money because his life serves as “a reminder that a citizen need not be a privileged insider to effect change—a man with a strong voice, speaking on behalf of a just cause, can bring about historic progress peacefully, through exhortation and persuasion.”

To read the full article on the Slate website, go to www.slate.com/.