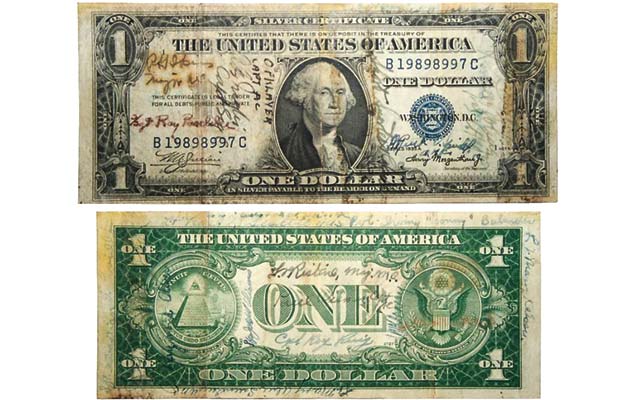 Thomas Sparks, the founder of the Short Snorter Project and a member of the American Numismatic Association, will drop eight vintage blue seal U.S. $1 silver certificate short snorters into circulation in Portland during the 2015 National Money Show, to be held March 5 through 7 at the Oregon Convention Center.

A short snorter is a currency note that has been signed by people traveling together by aircraft. The tradition began in the 1920s with Alaskan bush pilots and spread through military and commercial aviation, especially during World War II. The term "short snort" means less than a full shot of liquor, a joke among pilots who knew the dangers of mixing aviation and alcohol.

Of the eight short snorters that will be dropped into circulation, one is signed by Red Skelton, a comedian and clown who was part of several United Service Organization (USO) tours during World War II.

"I wish to bring attention to the Short Snorter tradition and provide a means to educate the public about these artifacts brought home by brave men and women who served our country," Sparks said. "The Short Snorter Project is dedicated to those who fought for our freedom. Many of those folks did not live to tell their own story. I would like future generations to understand Short Snorters and keep the memories alive."

Sparks will be promoting short snorter notes throughout the show. He will give a Money Talks presentation at 11 a.m. Saturday, March 7, titled "The Short-Snorter Project: Still Keeping the Memories Alive" in Room E144. He will also exhibit a collection of short snorters at the show.

The Portland National Money Show features more than 500 numismatic dealers with extensive inventories; the ANA Museum Showcase, exhibiting some of the world's most valuable and beautiful coins and paper money; the collector exhibits area; and a wide range of educational presentations and seminars. Show hours are 10 a.m. to 5:30 p.m. Thursday, March 5, and Friday, March 6; and 10 a.m. to 4 p.m. Saturday, March 7. ANA members are admitted free and may enter the bourse 30 minutes before the public on Friday and Saturday. For more information about the show, go to NationalMoneyShow.com.