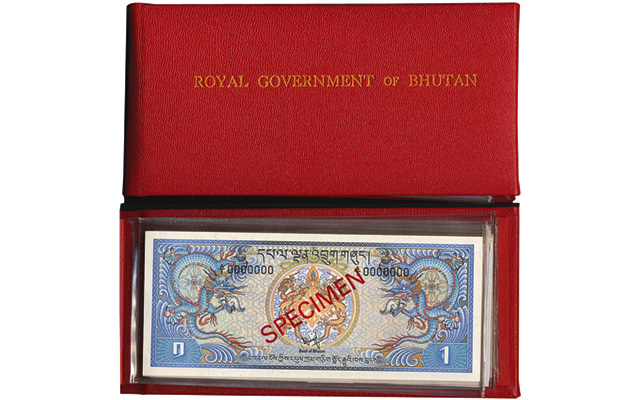 This red leather presentation album of seven specimen notes of Bhutan sold for $2,982 Dec. 9, 2014, by Spink in London.

Bhutan is a tiny and remote Buddhist kingdom tucked up high in the Himalaya Mountains between India and China.

With its remote location and restrictions on tourism, it’s easy to imagine it could have inspired James Hilton, who wrote the novel Lost Horizon in 1933, about a mythical place called Shangri-La.  The book was made into a movie by the same name in 1937 by Frank Capra

Hilton’s inspiration for the physical location and cultural elements of Shangri-La are thought to be in China. He traveled in the region before writing his popular novel.

Also sold for £1,000 ($1,565 U.S.) during the auction was a rare specimen 5-taler note from the Bank of Abyssinia circa 1914. The roulette and stamp CANCELLED note was graded by the firm as Good Extremely Fine.

Portrait of Colombia's most famous author, Gabriel Garcia Marquez, on a future design