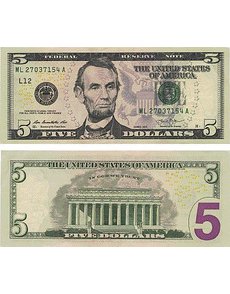 Collectors can be on the lookout for Series 2013 $5 and $10 Federal Reserve notes in circulation, according to the Bureau of Engraving and Printing.

For the Series 2013 notes, the first letter of the two prefix letters in the serial number is M. The second letter indicates the Federal Reserve Bank for which the notes were printed.

The Series 2013 $10 FRNs were produced at the BEP’s Western Currency Facility in Fort Worth, Texas, in October and November of 2013.

December 2013 production totals for the Washington and the Fort Worth printing plants will be posted on the BEP website, www.moneyfactory.gov, sometime in January 2014.

The next Series 2013 denomination to be printed is the $20 FRNs.

The designs for all of the notes are unchanged and are of the current colorful Next Generation style introduced by the BEP in this century.

All Series 2013 notes bear the facsimile signatures of U.S. Treasurer Rosa Gumataotao Rios and Treasury Secretary Jacob Lew. Since his nomination in January 2013 when President Barack Obama joked that Lew’s signature might devalue the dollar, Lew apparently has been practicing his penmanship.

Lew’s original signature — a series of various sizes of loops — can be found on dozens of documents from his time as Obama’s White House chief of staff and before that as director of the Office of Management and Budget.

His signature duplicated on the Series 2013 Federal Reserve notes is more legible. ¦