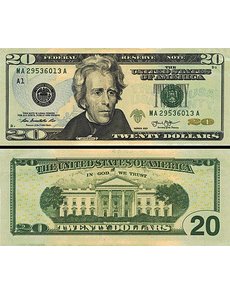 The Series 2013 $20 Federal Reserve notes are in circulation.

The first note was printed for the Federal Reserve Bank of New York, indicated by the letter B in the MB prefix to the serial number.

The second note was printed for the Federal Reserve Bank of Boston, indicated by the letter A, the second letter in the MA prefix of its serial number.

The first letter, M, in both serial prefixes indicates the notes are in Series 2013. Both notes were printed at the Bureau of Engraving and Printing’s headquarters plant in Washington, D.C.

The designs for all of the Series 2013 Federal Reserve notes are otherwise unchanged and are of the current colorful Next Generation style introduced by the BEP in the 21st century.

No Series 2013 $20 FRNs were printed during that time at the BEP’s Western Currency Facility in Fort Worth, Texas.

Production figures for December 2013 at the headquarters and Fort Worth plants are expected to be posted sometime in January. ¦