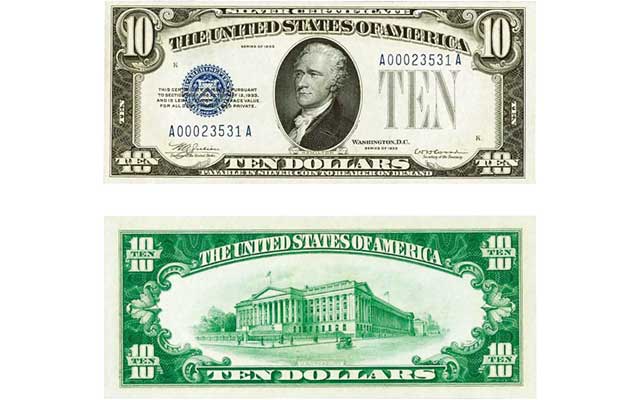 The Series 1933 $10 silver certificate (Friedberg 1700), the most eagerly anticipated of the 671 lots offered at the floor session of the Stack’s Bowers Galleries Baltimore paper money auction on July 16, didn’t just break all previous records — it shattered them.

Considered the rarest of all small size U.S. type notes, it sold for $70,500, including the 17.5 percent buyer’s fee, more than double its $25,000 to $35,000 estimate. This is more than twice the price of $35,938 that Stack’s Bowers realized for an example in 2012 and the $35,520 to Heritage in 2013 for another one. Both these notes were also graded Gem Uncirculated 66, and more remarkably, they were fancy numbers, A00000088A and A00000027A, respectively. The example just sold, with a pedestrian A00023531A serial number, with virtually perfect centering, was described as “incredible” and was rated by Paper Money Guaranty as Gem Uncirculated 66 Exceptional Paper Quality.

“The price realized for the 1933 $10 Silver Certificate is simply amazing,” said Peter A. Treglia, director of currency for Stack’s Bowers. He added, “At the same time however, it is not surprising as it is the pinnacle of small size rarities and is one of the finest ever graded.”

The featured item in the 134-lot large-size section was a Series 1880 Black Back $10 silver certificate (F-288). The bust of Robert Morris, a founding father, financier of the American Revolution, superintendent of Finance under the Confederation and senator from Pennsylvania, is on the left side of the obverse. In the center are a large Treasury seal and the Roman numeral X in brown ink. The 1878 and 1880 silver certificates broke the normal pattern, as their backs, with ornate lathework, were printed in black and not green ink.

The note was graded by PCGS Currency as Choice About New 58 Premium Paper Quality, but the cataloger also noted that when the note was viewed closely, signs of circulation could not be found. Estimated at $12,500 to $17,500, it was knocked down at $16,450.

It is not the rarest Confederate note, not even from 1861, but the $5 issue long known as the “Manouvrier note” is one of the most interesting. It is dated July 25, 1861, and was printed by printer and lithographer Julius (or Jules) Manouvrier, a Frenchman born in Prussia and living in New Orleans. It is the only one of the 38 Confederate types with an 1861 date that has anything printed on the back, although the pale blue CONFEDERATE STATES OF AMERICA and five “V”s representing the value are not much more attractive than the blank backs on all the others. The government believed that the entire deign was too simple, and only 15,556 notes were printed. Neither impaired nor canceled, it was graded by PMG as Choice Fine 15, and sold for $4,112.50 on an estimate of $1,500 to $2,000.