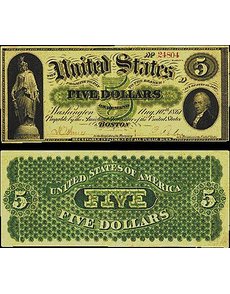 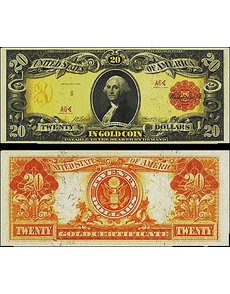 Heritage Auctions sold this “Technicolor” note, with serial number 6, for $70,500 at its Long Beach auction. It is one of only seven known Series 1905 $20 gold certificates.

The total prices realized for the six-session paper currency auction is $7,284,750 as of Sept. 27, when the floor sessions ended.

According to Heritage’s auction lot description, this is “an extraordinary note and the highlight of this sale.”

The note sold below Heritage’s estimate; the lot description stated, “we certainly anticipate a realization well over $100,000.”

The note is nicknamed the “Technicolor” note for its colorful appearance. The use of the term “Technicolor” in describing the note would have come into use sometime after the term was introduced to Americans by the Technicolor Motion Picture Corp. in the 1930s. “Technicolor” came to be used to describe anything in bold color.

Also sold during the auction was an extremely rare Series 1861 $5 demand note graded PCGS Apparent Extremely Fine 40, for  $11,162.50. Only four such notes have been graded Extremely Fine, with none better.

According to the catalog description, “Quite typically for this rare early issue, there is a small repair on this new to the census piece, but it is minor and can be seen only with careful examination through the PCGS holder.”

For more information about the results of this auction visit Heritage at www.ha.com. ¦