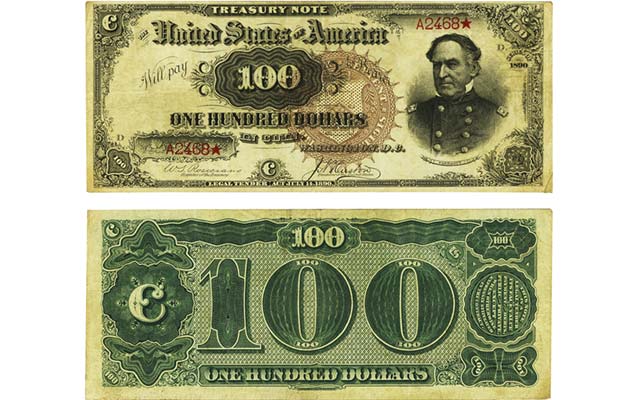 Should there still be any doubters about the resurgence of the high end of the United States paper money market, the sale by Heritage Auctions of a Series 1890 $100 Treasury note (Friedberg 377) for $199,750, including the 17.5 percent buyer’s fee, should change their minds.

The aptly named “Watermelon note” (owing to the shape of the zeroes on the back), a legendary piece of American paper currency from the holdings of the Eric P. Newman Numismatic Education Society, was graded Very Fine 30 Premium Paper Quality by PCGS Currency. It was sold to a floor bidder at the Central States Numismatic Society show in Schaumburg, Ill., on April 23.

This note is a good measuring stick for the high end of the market. With a total of 35 examples remaining out the 120,000 printed and just eight of them impounded in institutional collections, Watermelon notes appear for sale with a fair degree of consistency, yet not enough to make the Newman pedigree as significant as it would be for a lesser note. Half of the 35 grade either Very Fine or Extremely Fine, making this example a nearly perfect benchmark.

The serial number A2468 is the second lowest recorded. It should be noted that the star next to the serial number is a design element. The usage of the star to indicate a replacement note did not begin until 1910.