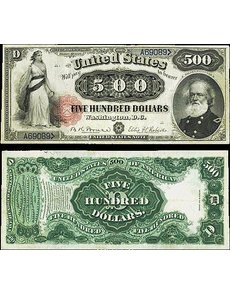 This Series 1880 $500 United States note, one of only five bearing the Bruce-Roberts signature combination, will be offered by Heritage Auctions in its Jan. 11 Signature Paper Money Auction in Orlando, Fla.

More than 300 lots of U.S. paper money will be offered Jan. 11 by Heritage Auctions in its Signature Paper Money Auction at the Orange County Convention Center in Orlando, Fla.

The auction is the official sale conducted during the 2013 Florida United Numismatists convention to be held Jan. 7 to 13 in the convention center.

Among the lot highlights will be one of only five Series 1880 $500 United States notes bearing the Blance K. Bruce-Elias H. Roberts signature combination, according to the auction firm.

The note, cataloged as Friedberg 185l in Paper Money of the United States by Arthur L. and Ira S. Friedberg, is graded Choice Very Fine 35 by Paper Money Guaranty, (Lot 17377).

The note is also the only example available to collectors. Of the other four notes, three are in the collections of Federal Reserve Banks and one resides in the Smithsonian Institution, according to the Heritage catalog description.

As for the note’s grade, “PMG [Paper Money Guaranty] has noted, ‘Splits’ on their holder, but the splits are wholly within the margins and very minimal,” according to the catalog.

A Series 1934 $10,000 Federal Reserve note, part of the Binion Hoard, will also be offered at the auction. The note, F-2231-B, is graded Apparent Choice About New 58 by PCGS Currency (Lot 17288). According to the catalog description, “Some minor restorations are mentioned by the grading service, but none visible to the untrained, and even some of the best trained eyes.”

The Binion Hoard, consisting of 100 $10,000 FRNs, was formerly on display in the entryway of the Binion’s Horseshoe Hotel and Casino in Las Vegas, Nev., where the hoard was arranged in a large horseshoe shape.

Also offered is the only known Brown Seal Series 1882 $500 gold certificate, F-1215a, graded Apparent Fine 15 by PCGS Currency (Lot 17505). “The note has some early undetectable professional restoration at the top edge, but gives the visual appearance of a problem free evenly circulated note,” according to the catalog.

What the firm calls one of the two or three nicest known Series 1861 $5 demand notes will be offered. The note, F-1, is graded About Uncirculated 53 by PMG.