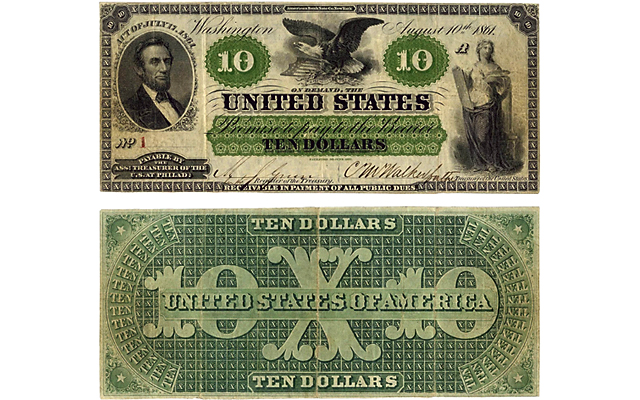 The note, cataloged as Friedberg 7a in Paper Money of the United States by Arthur L. and Ira S. Friedberg, is one of three examples known, according to a PMG news release.

The note has not been seen publicly since it was auctioned in 1970 by Sotheby’s, according to PMG and the “for the” inscriptions used with the signatures are considered “high quality.”

Policy at the time required that demand notes be signed individually by the register of the Treasury and the treasurer of the United States. However, since millions of notes were being printed, the actual signing was delegated to Treasury Department clerks “for the” two officials whose titles were printed on the faces of the notes.

The “for the” inscriptions appear in two forms: hand written, as on the note that was just graded; or on later issues, engraved on the plates to reduce the workload of the signers.

Demand notes were popularly known as “greenbacks” for the color of the ink used on the backs of the notes.

As one of the first $10 “greenbacks” issued by the U.S. in 1861 to fund the Union’s campaign during the Civil War, its significance in American history nearly goes unmatched among U.S. paper currency, according to the news release.

The note will be offered at the Currency Platinum Night Auction by Heritage Auctions during the American Numismatic Association World’s Fair of Money in Rosemont, Ill., Aug. 5 to Aug. 11.