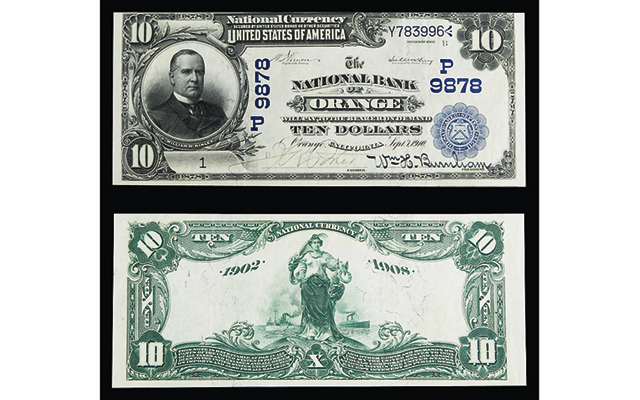 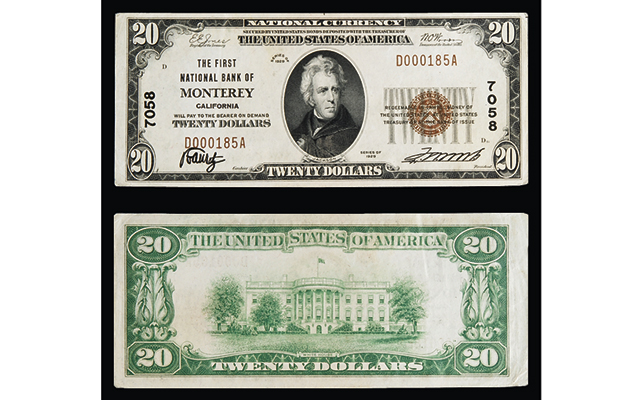 This Series 1929 $20 note issued by the First National Bank of Monterey, sold for $911 in a June 1 to 4 auction conducted by Ira and Larry Goldberg Auctioneers.

The note, issued by the National Bank of Orange (California), was sold in a June 1 to 4 auction by Ira and Larry Goldberg Auctioneers for $9,048.

The note, graded Extremely Fine 40 Premium Paper Quality by PCGS Currency, is “the first to appear from this bank and is new to the census,” according to the catalog. The note features pen signatures and has “bright, fully original paper.” Its pre-sale estimate was $10,000 to $15,000.

The National Bank of Orange was established in 1910 and closed in 1927. The bold handwritten signature of William H. Burnham can be clearly seen in the bottom right corner of the face of the note.

Burnham was born in Ellington, Conn., in 1851; worked in a family-owned manufacturing business in Batavia, Ill.; and moved to Orange in 1893.

Burnham became a prominent businessman and was involved in several bank in California from the late 19th century. He was a director of the Commercial Bank in Santa Ana and of the Bank of Orange. He was one of the original organizers of the Orange Savings Bank.

He was also one of the organizers and a director of the Santiago Orange Growers Association. In 1916 at the age of 65, he sold his ranch, where he grew orange and lemon trees, and moved to Los Angeles.

The First National Bank of Monterey, once located in the fabled central California coastline town of Monterey, issued a Series 1929 $20 national bank note that sold in the same auction for $911, following an estimate of $1,000 to $1,250.

The note, one of about 25 known from this bank, was graded by the auction firm as Very Fine.

Arthur G. Metz, one of the founders of the bank, served as cashier. His signature can be seen at the bottom left side of the note face. The bank received its national bank charter in 1903 and continued in business until 1935.