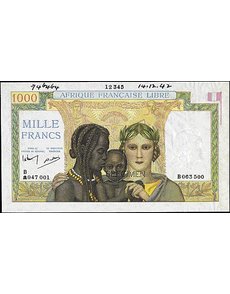 The £1 note (Lot 15795) issued for the East Lothian Banking Co. (Dunbar, Scotland) is signed by cashier William Borthwick. The note is graded Gem Uncirculated 65 Exceptional Paper Quality by Paper Money Guaranty. The bank was established June 1, 1810, and Borthwick was recruited by the directors of the bank “at the onset of the business and moved from his employment with the Falkirk Union Banking Company,” according to the catalog description. 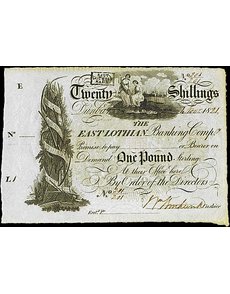 This 1821 £1 note issued for the East Lothian Banking Co. (Dunbar, Scotland) was signed by cashier William Borthwick, who eventually stole the bank’s deposits in April 1822. This 1941 French Equatorial Africa 1,000-franc specimen note was issued for one of France’s colonies during World War II that “rallied to the Free French forces in August 1940,” according to the catalog.

An 1821 bank note from Scotland, signed by the man who caused the bank to fail after he stole its deposits, will be offered during the Sept. 6 to 7 Heritage Signature Auction in Long Beach, Calif.

The bank was established June 1, 1810, and Borthwick was recruited by the directors of the bank “at the onset of the business and moved from his employment with the Falkirk Union Banking Company,” according to the catalog description.

Though Borthwick’s age at the time of his employment is uncertain, “it is thought he was in the region of 20 to 22 years of age. His youth for such a position is thought to be reflective of the general lack of experienced Scottish bankers, which was the consequence when many experienced Scottish bankers were recruited by other Scottish, United Kingdom, and international banks,” according to the catalog.

The bank’s directors, however, found that Borthwick did not meet their expectations.

The catalog notes that apparently Borthwick stated his intention to “kidnap the directors of the bank, to imprison them in air-holed vessels, and to then set them off on a trade ship to Danzig. Although, whether these comments were a true intention or not is difficult to say.”

On April 10, 1822, Borthwick, possibly alone or with an accomplice, “removed cash and bills from the bank and departed,” according to the catalog. “It is very likely that the economic climate of the time was causing other businesses in which he had an interest (with his Brother, Bruce Borthwick) financial difficulty and that William Borthwick was [propping] up these businesses using the Bank’s funds. When he could no longer support this he fled. There is some debate as to whether he ever stood trial for the offence although it is known that he was arrested in South America.”

Other notes to be offered include a 1941 French Equatorial Africa 1,000-franc specimen note (Lot 15513). The note was issued by one of France’s colonies during World War II that “rallied to the Free French forces in August 1940,” according to the catalog.

The note, graded PMG Extremely Fine 40, has the word SPECIMEN perforated towards the bottom edge.

A 1923 £1 note (Lot 15016) issued by the Commonwealth of Australia is graded PMG About Uncirculated 55 EPQ, with a single center fold, according to the catalog.

A 1903 5-boliviano face proof (Lot 15124) for El Banco Francisco Argandona is roulette-canceled SPECIMEN at the bottom. The note is PMG graded Choice Unc. 63.

A pair of 1905 color face and back proofs of a 20-franc note (Lot 15393) for Dansk-Vestindiske National Bank (Danish West Indies) will be offered as one lot. PMG graded the face proof Choice About Uncirculated 58 EPQ and assigned a grade of Choice Uncirculated 64 to the back proof, with a mention of a small tear in the right margin. Both pieces are roulette-canceled SPECIMEN near the bottom edge.

A 1906 100-Egyptian-pound specimen note (Lot 15434) depicting the Philae Temple is perforated CANCELLED at lower edge on back. PMG graded this previously mounted piece as Uncirculated 61.

A $5 specimen note (Lot 15791) for the Barclays Bank Dominion, Colonial and Overseas for Saint Kitts and Nevis is PMG-graded Choice Uncirculated 64.

The two-session live auction is to be held at the Long Beach Convention Center in Long Beach, Calif.

The first session, scheduled for Sept. 6, offers more than 400 lots of notes from Afghanistan to El Salvador.

The second session, scheduled for Sept. 7, offers more than 100 lots of notes from Equatorial African States to the Isle of Man.

Lots are available for viewing online at the Heritage website, www.HA.com.