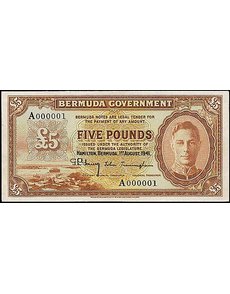 This serial number 1 Bermuda £5 note, from the David J. Saul Collection of Bermuda bank notes, sold for £45,600 in an Oct. 4 auction in London by Spink.

Saul bought most of his notes from overseas collectors and auction houses and, according to Spink, the “hunt” for the notes added a fun dimension to building the collection.

For the full list of prices realized for this auction, visit the Spink website at www.spink.com. The firm can also be reached by sending an email to info@spink.com or by writing to Spink and Son Ltd., 69 Southampton Row, Bloomsbury, London WC1B 4ET, United Kingdom. ¦