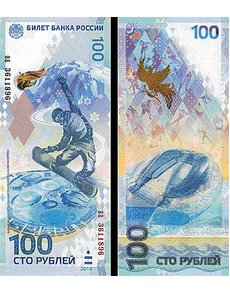 A snowboarder flies through the air on the face of the new Russian 100-ruble commemorative note issued to mark the nation’s hosting of the 2014 Winter Olympics.

Winter sports are the focus of the designs of a Russian 100-ruble note to mark the nation’s hosting of the XXII Olympic Winter Games in Sochi, Russia, in 2014.

The seaside town of Sochi will be the site of not only the Winter Games Feb. 7 to 23 but also the XI Paralympics Winter Games March 7 to 16.

The face and back designs of the notes bear an ice-blue background color and are displayed in a vertical format.

The face design of the notes depicts a snowboarder in mid-air with a view of the Caucasus Mountains in the background.

At the bottom of the face of the note is a vignette of the Sochi Olympic village complex on the coast of the Black Sea.

The back design depicts the Fisht Olympic Stadium, named after Mount Fisht in the western Caucasus Mountain range, and a stylized design of the firebird of Russian folklore fame.

A portion of the back design also shows a mosaic-like background depicting various winter sports. The Fisht stadium will host the opening and closing ceremonies of the Olympic. ¦