Russia will not print polymer notes for circulation 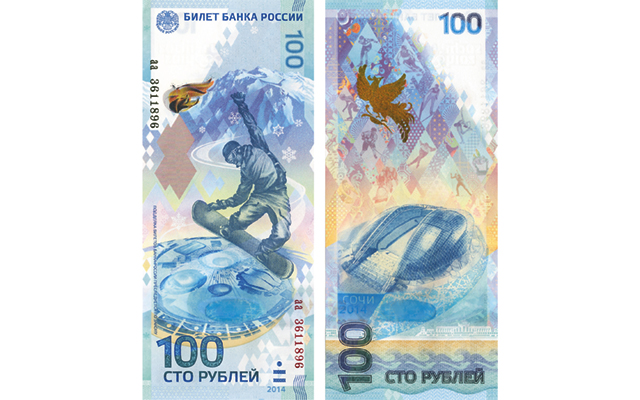 This polymer Russian 100-ruble note was issued in early 2014 to mark the nation's hosting of the XXII Olympic Winter Games in Sochi, Russia.

“In the near future, I think, we are not going to surprise you with something radically new. We are not planning either a 3,000-ruble note, or plastic money,” he said. “From the point of view of duration, price and quality, paper money is usually more effective than plastic money,” the official said.

However, he added, the situation may change over time.

Russia did issue a 100-ruble polymer note commemorating the nation’s hosting of the XXII Olympic Winter Games in Sochi, Russia, in early 2014.

The face design depicts a snowboarder in mid-air with a view of the Caucasus Mountains in the background.

The back depicts the Fisht Olympic Stadium, named after Mount Fisht in the Western Caucasus Mountain range, and a stylized design of the firebird of Russian folklore fame.

Goznak, one of the world’s largest producers of coins, bank notes, postal stamps and awards, was founded in 1818 by order of Tsar Alexander I.

The company produces 5 billion coins, 7 million bank notes and up to 40 million passports annually, according to its website.

In addition to producing for Russia, Goznak has produced coins and bank notes for countries across Latin America, Southeast Asia, Europe and Africa, as well as for the former Soviet republics.