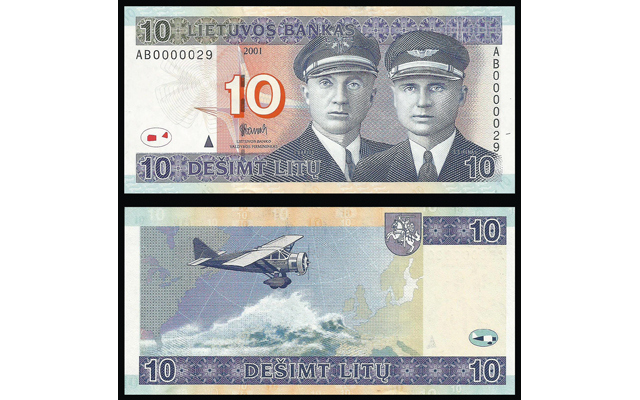 Lithuanian 10-litas note features aviation pioneers Steponas Darius and Stasys Girenas on the face, and the plane in which they were killed in 1933. 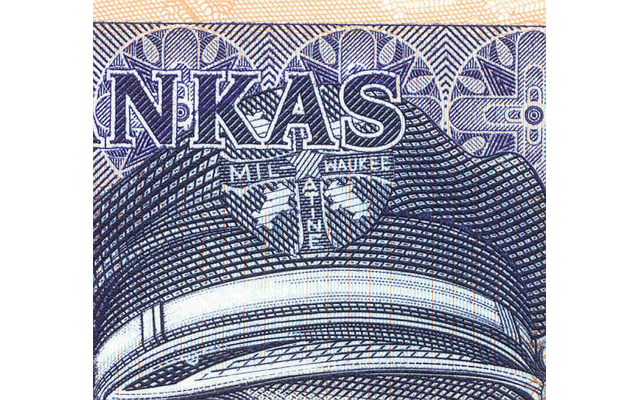 Close-up image shows details of an airport patch on the cap frequently worn by Steponas Darius.

Frank Passic is a longtime collector of Lithuanian numismatic material and founder of the Lithuanian Numismatic Association.

On Jan. 1, 2015, Lithuania will be replacing its national currency, the litas, with the euro. Litas coins and bank notes will be exchanged for new euros. Included in that exchange will be the retiring of a note that has U.S. ties.

The 10-litas bank note has been a popular one, as the face features the images of two national heroes, aviators Steponas Darius (1896 to 1933) and Stasys Girenas (1893 to 1933). The duo attempted to beat Charles Lindbergh’s nonstop distance record across the Atlantic Ocean in 1933, by attempting to fly from New York City, to Kaunas, Lithuania. Their plane left Floyd Bennett Airport in New York City headed for Kaunas on July 15, 1933. Unfortunately, it crashed over Soldin, Germany (now Mysliborz, Poland), on July 17, killing both men.

The images of Darius and Girenas have been memorialized on numerous Lithuanian notes, coins, stamps, medals, and decorations.

Darius was born in Rubiske, Lithuania, and his family moved to the United States in 1907, settling in Chicago. He was quite a sportsperson, and also worked as an errand boy at an aviation store owned by the Wright brothers. In 1917, during World War I, he joined the U.S. Army and served in France. After moving back to Chicago following his period of service, he went back to Lithuania where he became part of the training squadron of the Lithuanian Air Force. He returned to the United States in 1927.

Darius earned various pilot’s licenses, and eventually began working for a Bellanca dealer at Palwaukee Airport (so named for its location near where Palatine Road intersected Milwaukee Avenue) north of Chicago. There he worked as a pilot and a aviation instructor.

Darius teamed up with Lithuanian-American aviator Stasys Girenas in 1932, and the pair formed a flying partnership dedicated to a well-publicized trans-Atlantic flight. Girenas had a similar background as his partner, having been born in Lithuania, educated in Chicago, and served in the U.S. Army during World War I.

The duo purchased a used Bellanca CH-300 Pacemaker plane from the Chicago Daily News (which purchased a newer model) in 1932 and modified it for their flight. In their publicity photos, Darius is always seen wearing his Palwaukee Airport patch on his cap.

In 1990, when Lithuania declared the re-establishment of its independence, plans were made for the re-establishment of the national litas currency. New litas notes dated 1991 in various denominations were released into circulation June 25, 1993. Subsequent printings of the 10-litas note featuring the aviators were issued dated 1993 and 1997. When additional issues were released several years later dated 2001 and 2007, the details on the design featured something that had not appeared on earlier printings.

The details of the Palwaukee patch on Darius’ cap are clearly visible in the 2001- and 2007-dated versions of the 10-litas note. In the center is a star that separates the text. The horizontal line reads MIL–WAUKEE. The top vertical text is covered over by the last letter A in LIETUVOS BANKAS, but a small portion of the letter L can be seen in what would have read PAL-. The bottom vertical portion reads ATINE.

The back of the note features their Bellanca, with an unboundaried map of Europe in the background. The Lithuanian national emblem, Vytis (Knight), appears in the upper right. The note was designed by Lithuanian artist Giedrius Jonaitis, a graduate of the Vilnius Art Academy.

As Lithuania says goodbye to its litas, the connection to the United States on the 10-litas note will not be forgotten.