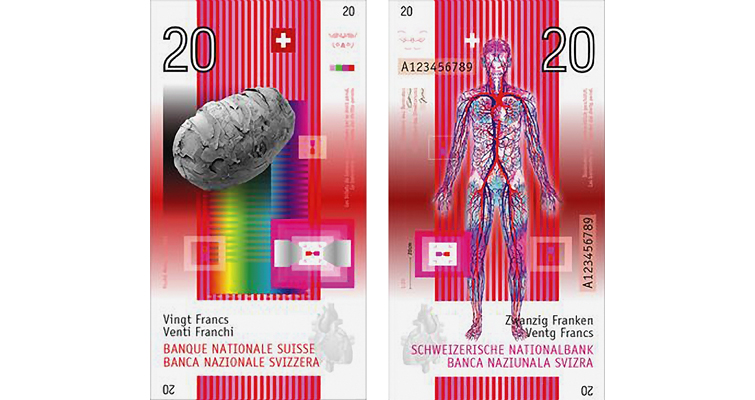 This was the originally chosen design for the 20-franc note, with designs for the other denominations featuring the same artistic style. The designs were abandoned following public criticism.

Swiss National Bank’s new 50-franc note is scheduled to enter circulation in April 2016, some six years after the original release date in 2010. Paper problems and rejection of the original choice of designs combined to cause the delay by approximately six years.

The Bureau of Engraving and Printing can take solace in the knowledge that it is not the only note printer to encounter production problems because of paper. It is hard to forget the problems caused by creasing of the paper in the Series 2009 $100 bill, a situation so bad that more than a billion of them were put in quarantine. They have never been released and we should not be surprised if they never are. They were originally scheduled for release in February 2011 and it took more than two and a half years for the Series 2009A notes that replaced them to make their appearance.

Switzerland has broken the BEP’s record. Aug. 14 the Swiss National Bank announced that it will release its new 50-franc note in April 2016, six years late. The note is the first in a new ninth series that will also include 10-, 20-, 100-, 200-, and 1,000-franc denominations, replacing the eighth series, introduced between 1995 and 1998. According to the bank, the new 20-franc note will be introduced in 2017 with the others following at half-year or yearly intervals.

Designs for the new series were made public in 2005 after a competition among artists, with the intent to put them into circulation beginning in 2010. As yet undisclosed security features created a similar problem to that encountered in Washington. The bank cited “unexpected technical problems” for delaying the release of the notes, which trace back to LandQart, a private Canadian owned firm based in the Graubünden town of Landquart. The firm had difficulties producing paper of the right quality on a consistent basis.

The new series is the work of Zürich graphic artist Manuela Pfrunder, the second-place winner of the bank’s competition. Unlike the current series, they do not have images of famous Swiss people.

The 50-franc note shows a mountain and hikers on its face and an image of the sun on the reverse. The 10-franc note shows slalom skiers on its face, but the back and both sides of all the other notes are without human figures, and instead have butterflies, snow crystals, graph plottings, an observatory, seashells, and some other things difficult to explain.

The winning designs were by the graphic designer Manuel Krebs of Zürich, who is best known for his typefaces. His proposed notes included devices such as embryos, blood cells, a diagram of the human circulatory system, maps, and the solar system.

The bank abandoned Krebs’ proposal after a public outcry in which the word “horrible” was quoted more than once.

The notes, which are designed to last at least 15 years, will be printed by Orell Füssli, the Zürich-based printer for the central bank.

Submissions of the 11 finalists are on the Swiss National Bank’s website: www.snb.ch/en/iabout/cash/newcash/id/cash_new_result.