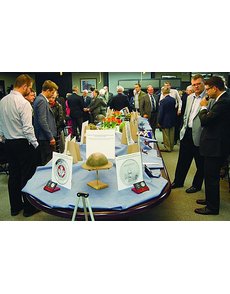 Visitors admire the display of circulating and collector coins put together by the Royal Canadian Mint. 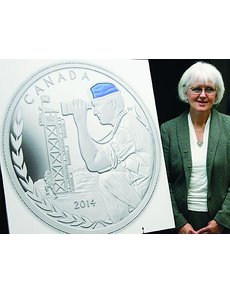 Veterans, citizens and coin collectors gathered at Legion House, the headquarters of the Royal Canadian Legion, on Oct. 7 for two very special events: the Royal Canadian Mint’s Annual Public Meeting and the launch of a 2014 $20 coin that commemorates the 50th anniversary of the Canadian peacekeeping mission in Cyprus.

Business was discussed first. After going over the Mint’s activities over the past year, James B. Love, chair of the Royal Canadian Mint Board of Directors, said he was happy to report that he had, a few days earlier, presented an annual dividend check of $10 million to the RCM’s exclusive shareholder, the Government of Canada.

Ian E. Bennett, president and CEO of the Mint, continued with some details on the Mint’s financial accomplishments.

“For the fourth year in a row, the Mint has climbed above the $2 billion threshold by generating nearly $2.6 billion in annual revenues in 2012,” Bennett said.

“Looking at the last five years, which happen to coincide with the start of the financial crisis and its prolonged effect on the global economy, we’ve generated more than $250 million in gross profits, which eclipses all of the Mint’s profits for the previous 25 years,” Bennett said.

He then pointed out that the RCM had “put together an impressive display of circulation and collector coins that commemorate the theme of remembrance. We’re also proud to showcase many of the medals that the men and women of the Mint are honored to handcraft for Canada’s soldiers and veterans.”

Bennett then announced that, since “next year marks the centennial of the First World War and the 75th anniversary of the Second World War, the Mint is developing an all encompassing coin program to commemorate these watershed moments in our history, starting in 2014.”

The exact details of the program are not yet known to collectors, but the collecting community knows it will comprise both circulating and collector coins and will span 2014 to 2020. The Remembrance program aims “to pay a worthy tribute to all those who steadfastly defended Canada and its values, with themes such as ‘The Canadian Home Front,’ ‘Canada on the Battlefront’ and ‘Peace and Legacy,’ ” Bennett said.

He then proceeded with the launch of a .9999 fine silver $20 colorized coin that commemorates the 50th anniversary of the Canadian peacekeeping mission in Cyprus.

“By celebrating 50 years of Canadian peacekeeping in Cyprus, we’re conveying the gratitude of all Canadians to our peacekeeping veterans and to those who continue to fulfill this vital function around the world. I hope that this sentiment will endure as long as the coin on which their inspiring stories are now preserved,” Bennett concluded.

The coin depicts three Canadian peacekeepers at an observation post: one, kneeling, looks through binoculars and sports what Bennett described as “the famed blue beret of the peacekeepers, almost as iconic as our beloved maple leaf”; and in the background, two other soldiers, one in a watch tower and another at the foot of the tower, also stand guard.

The scene was engraved by Royal Canadian Mint engraver Susan Taylor, who said that she paid particular attention to the rendering of the United Nations badges on the uniform and beret, “making sure that all the details were captured accurately.”

Taylor also paid great attention to the rendering of the blue beret, which is delivered by translucent enamel. “I wanted to make sure that the folds in the beret were lifelike.”

For more information on this piece, visit the Royal Canadian Mint’s website at www.mint.ca. ¦