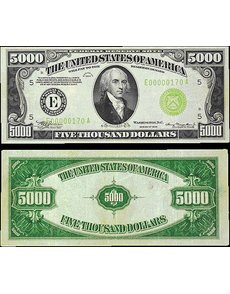 A Series 1934 $5,000 Federal Reserve note with low serial number found hidden in the pages of a Zane Grey novel was sold at auction for $62,100 (which includes the buyer’s fee).

The note, which has serial number E 00 000 170 A, was sold at an Aug. 27 auction conducted by Ken Farmer Auctions & Appraisals LLC in Radford, Va. Kenneth W. Farmer Jr., owner of the auction house, is an appraiser for the PBS television series Antiques Road Show.

A family member of a deceased collector found the Series 1934 $5,000 FRN printed for the Federal Reserve Bank of Richmond, Va., according to Robert Wall, an employee of the auction firm.

The note was authenticated by Paper Money Guaranty and graded Very Fine 25 with a notation that it had “exceptional color and eye appeal.”

Just 2,400 of the Series 1934 Richmond notes were printed and surviving numbers are undoubtedly smaller. The $5,000 denomination was discontinued in July 1969 and existing note inventories were destroyed.

Wall said the client described his deceased brother as “an eccentric individual. A painter by trade, he did not trust banks, checks, and credit cards. His financial transactions were almost exclusively cash only, including normal monthly debts. He kept cash at home mostly in Mason jars, shoes, and books.”

Wall said the client and his siblings “were stunned upon learning of this discovery and made it a point to search thoroughly through the estate.” The deceased collector lived modestly in a house that his brother referred to as “spartan,” according to Wall.

The client told Wall that his brother “never indicated that anything like this note was in his possession. A lifetime bachelor, his main hobby was collecting and restoring Volkswagens.”

Wall said the moral of the story is: “Never take anything for granted when dealing with loved ones’ estates — you may be the beneficiary of something quite unique and valuable.”

For more information about paper money in upcoming auctions visit the firm’s website at www.kfauctions.com, or call the firm at 540-639-0939 or email it at info@kfauctions.com. ¦