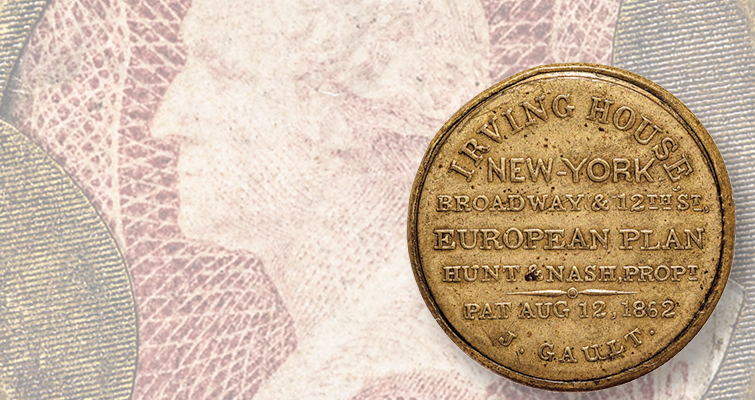 Irving House, on behalf of which this encased postage stamp was issued, operated as a hotel in lower Manhattan near the area now known as Union Square. 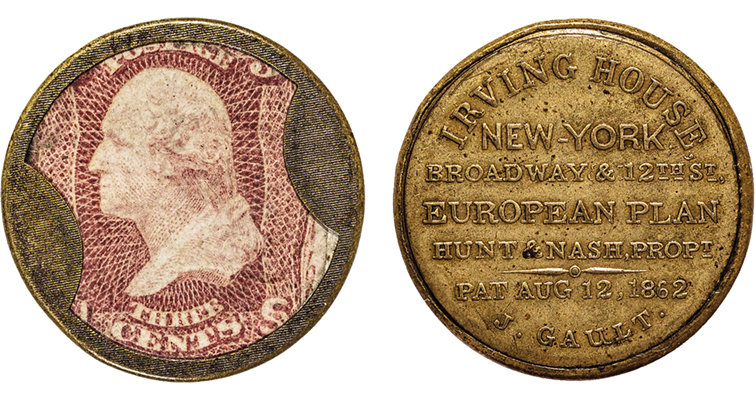 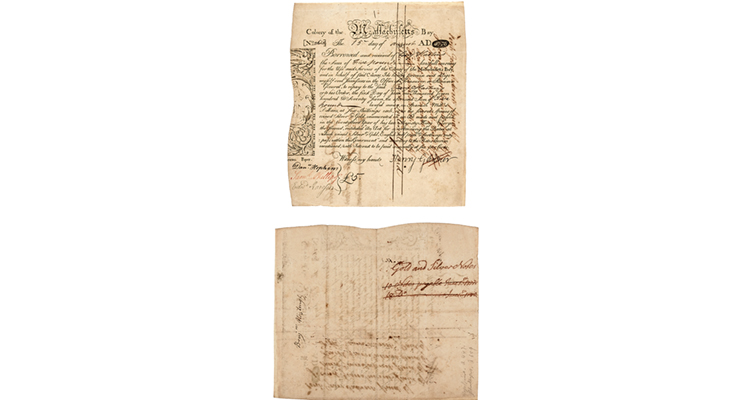 Aug. 15, 1775, loan document engraved and printed by Paul Revere is one of the auction highlights. 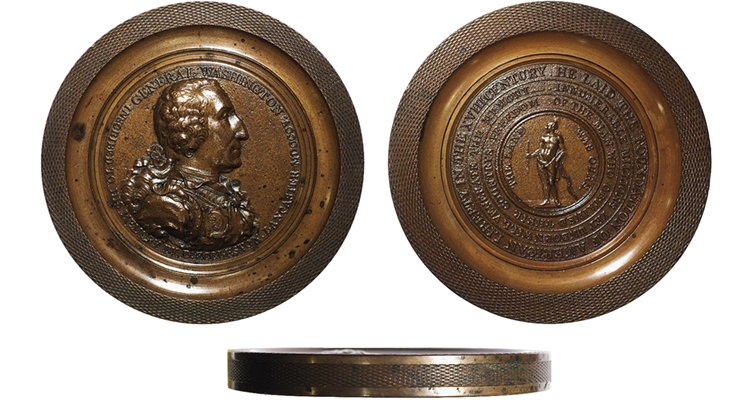 The 388-lot auction also features a number of collectibles executed by Paul Revere, including an engraved and printed loan document. Also featured is an 1805 George Washington portrait Eccleston medal in copper.

The Irving House 3-cent encased postage stamp with ribbed frame is cataloged as HB-150 in The Standard Catalogue of Encased Postage Stamps by Michael J. Hodder and Q. David Bowers and Reed-IH03RB in Fred L. Reed's Civil War Encased Stamps: The Issuers and Their Times.

Irving House was a hotel in lower Manhattan, situated at Broadway and 12th Street, just two blocks below what would later be named Union Square. George W. Hunt was the proprietor and Charles W. Nash was in charge of the food and catering service.

Nash left the partnership in 1863 to open his own restaurant. Hunt remained another six years, when he sold his interest to George Harlow.

The surnames of both Hunt and Nash appear raised in the message on the encased postage stamp’s metallic frame reverse.

With an estimate of $16,000 to $20,000, the Aug. 15, 1775, Massachusetts Bay loan document for £5 at 6 percent interest is graded as Choice Extremely Fine. Paul Revere engraved and printed this “King Philip” document. It is cataloged as Anderson MA-1 in The Price of Liberty: The Public Debt of the American Revolution by William Anderson.

The loan document is identified as being the first Revolutionary War finance bond.

The vignette on the engraved plate on the left side of the document’s face depicts the sacred codfish and image of the Pokunoket chief, Metacom — also known as King Philip.

According to History.com, “King Philip’s War (1675-1676) marked the last major effort by the Native Americans of southern New England to drive out the English settlers. King Philip led a bloody uprising of Wampanoag, Nipmuck, Pocumtuck and Narragansett tribes. The fighting lasted fourteen months and destroyed twelve frontier towns, ending shortly after Metacom was captured and beheaded.”

Four signatures appear on the back of the loan document — those of Daniel Hopkins and Henry Gardner in brown ink, Samuel Philips Jr. in red and Edward Rawson in light blue.

The 1805 George Washington medal is identified as a variant of Baker 85 (Medallic Portraits of Washington by W.S. Baker) but unlisted in Baker or other medallic references. Choice Uncirculated with an estimate of $3,750 to $4,500, the 112-millimeter Thick Format medal reportedly weighs more than 1.5 pounds.

According to the auction lot description, the center is “sharp cast from a late die state specimen, surrounded by a broad and thick band which starts near medal with rising series of concave border circles and ends with machine-scored tire rim.” The edge has two bands of plain surface separated by another band of the “tire tread” design.

The “Eccleston” reference is to the pro-American Quaker radical Daniel Eccleston for whom the medal was struck in England. The piece was distributed in America.