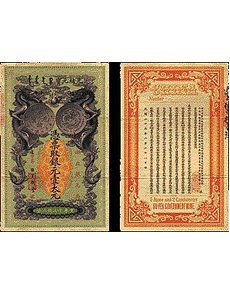 What is reported as the finest known example of an 1899 Hupeh Government $1 (7 mace and 2 candareens) note realized $51,920, leading all lots in Champion Hong Kong’s Nov. 30 auction.

The “finest known” example of a rare bank note from Hupeh Province in China showing a Chinese silver dollar, according to Champion Hong Kong Auctions, which auctioned the note Nov. 30, realized $51,920.

The 1899 Hupeh Government $1 (7 mace and 2 candareens) note, identified as Pick S2135 in the Standard Catalog of World Paper Money, edited by George Cuhaj, highlighted the Arthur Coole Collection of Chinese paper money, one of several marquee consignments in the auction.

The note is in a vertical format and without punch cancellations often found on these notes.

On the face, two dragons each hold one side of a Dragon silver dollar, while the orange back shows a table of Chinese characters.

The auction of 416 lots of Chinese paper money was one of three auctions conducted by Champion Hong Kong Auctions in conjunction with the first Hong Kong Invitational Numismatic Convention. A total of 303 lots from 416 offered in the paper money sale, or 72.8 percent, were sold, as the firm realized $267,185.40, including the buyer’s fee.

An 18 percent buyer’s fee was applied to successful bids, reflected in the prices here.

Lots are posted for free viewing online at the firm’s website, www.cghka.com/english. Print catalogs may be ordered from the firm.

China, Ming Dynasty, circa 1368 to 1399 mulberry bark Pao Chao 1-kuan note, Ta ming, “earliest collectible paper money,” “one account about the Ming notes is that a bundle was found underneath a statue of Buddha during the Boxer Rebellion of 1900,” formerly in the Arthur Braddan Coole Collection, Paper Money Guaranty Very Fine 25, $17,700.