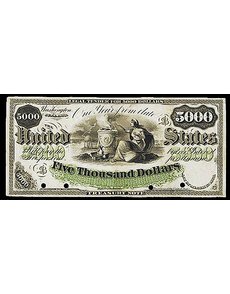 This rare $5,000 face proof for an 1863 interest-bearing Treasury note will be offered by Heritage Auctions in October during the official auction of the American Numismatic Association National Money Show in Dallas.

Only the second known 1863 $5,000 interest-bearing Treasury note face proof will be offered by Heritage Auctions at the Oct. 17 to 21 Signature Currency Auction during the American Numismatic Association National Money Show in Dallas.

The face proof was found in a box of old papers by the consignor who wishes to remain anonymous.

The only other example of the proof is held by the government, with the new find apparently being the first to be available in the marketplace.

The face proof is for a $5,000 one-year interest-bearing note (Friedberg 202, Paper Money of the United States by Arthur L. Friedberg and Ira S. Friedberg). The design has a single vignette known as the Altar of Liberty, which depicts a female figure kneeling before a round altar with burning incense atop it. The round altar bears a “medallion” vignette representative of George Washington.

Near the altar is an open box and what appears to be a necklace and bracelet lying nearby along with an urn. In the background a bolt of lightning is coming down from the sky near a four-pillared shrine located along a shoreline with crashing waves.

The note was graded by PCGS Currency as an Extremely Fine 40 Apparent, with the holder designating “hole punched cancelled, damage and restoration.”

The consignor told Coin World that after his mother died three years ago, he and his siblings began cleaning out her house. He said they donated some items, sold others and boxed up the rest.

He said he loaded up some of the boxes and took them home thinking “maybe there’s something in there I can sell on eBay.”

One day a few months ago he was going through some of the boxes and found the note proof, though, he said, at the time he didn’t realize what he had found.

“I found many interesting old documents and papers and one box contained a lot of different things having to do with the Civil War and this [proof note] was in [an envelope in] that box,” he said. “When I held it in my hand I knew it wasn’t made by some guy in his garage.”

The United States Treasury issued one-year notes under the Act of March 3, 1863. The canceled note proof to be offered in the auction is dated Oct. 1, 1863.

The redemption clause states that the United States will pay the bearer 5 percent interest one year from the date on the note. The uniface proof has four small punched holes along the bottom.

Researcher and author Hessler said the only other 1863 $5,000 interest-bearing face proof known is at the Bureau of Engraving and Printing headquarters in Washington, D.C., which he discovered while doing research there circa 2000.

Michael G. Moczalla, Heritage’s consignment director, said he believes the note proof to be “unique” and that it could bring “$50k or more.”

“It is a wonderful piece that gives one collector an opportunity to represent a F-202 in their collection,” Moczalla said.

The consignor said he will not be attending the auction in person but will watch it online via the Heritage Live streaming video and audio feature.

He said he will start looking through the other boxes he brought home and be on the lookout for more hidden treasures.