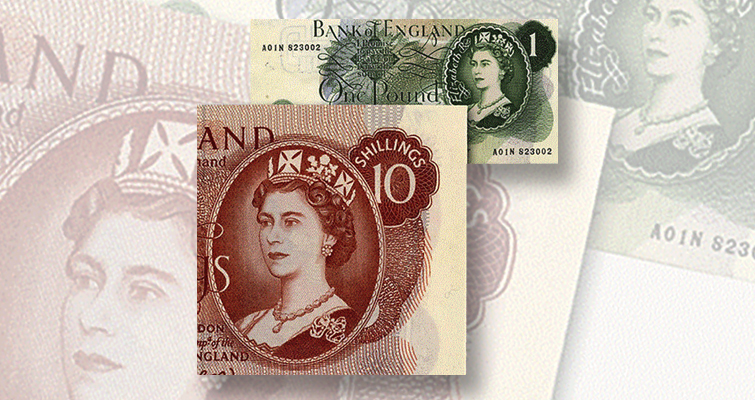 Not until 1956, three years after her coronation, did the Bank of England obtain permission from the Treasury for a new series of bank notes with the queen’s portrait, designed by Robert Austin. It then took four years until a £1 note was issued, on March 17, 1960, followed by a 10-shilling note the next year.

Within hours of the death of Queen Elizabeth II, world media was rife with information and misinformation about the effect her death would have on currency.

Along with immediately expressing condolences, the Bank of England had to issue a statement saying, “Current banknotes featuring the image of Her Majesty The Queen will continue to be legal tender. A further announcement regarding existing Bank of England banknotes will be made once the period of mourning has been observed.”

Even U.S. media quickly got in on the act, with Hoda Kotb on the NBC News Today Show saying that England would now have to change the portrait on the £1 note, unaware that none have been made since the advent of the coin of the same value in 1983, and that all paper pounds still circulating were withdrawn in 1988.

The Bank of England Museum provides a detailed review of the queen on English currency. It is easy to forget that Queen Elizabeth II is the only English sovereign ever to have been portrayed on Bank of England notes, and King Charles III will be the second and the first male sovereign. Current Bank of England notes do depict other individuals, both men and women, though none are royalty: Winston Churchill, Jane Austen, J.M.W. Turner, Alan Turing, Adam Smith, and Matthew Boulton and James Watt.

The Treasury, not the bank, issued some 10-shilling and £1 notes during World War I displaying a small vignette of King George V.

It was not until 1956, three years after her coronation, that the Bank of England obtained permission from the Treasury for a new series of bank notes with the queen’s portrait. It then took four years until a £1 note was issued on March 17, 1960, followed by a 10-shilling note the next year.

The museum says these notes, showing her wearing the Diamond Diadem crown she wore on the way to her coronation, were made by Bank of England note engraver Robert Austin.

The queen was not a passive subject. Her private secretary wrote the bank that, while she was pleased in general, “her one and only objection is that the drawing of her face does not show the line of her jaw at all,” and that it would be an improvement if corrected. That, however, would have ruined the portrait so it went to the printer as it was.

When the note was released, some reviews were harsh. There was a feeling that she looked severe and unrealistic. A bank governor opined that there was too much hair, and that reducing it might make her look younger; her chest was too full, giving her a “portly” look; her left eye did not seem to be looking in the right direction; and her mouth needed a little softening.

A new portrait was prepared for the £5 note of 1963 and £10 note of 1964 not by a bank note engraver, but by Alan Reynolds Stone, a specialist in woodcuts and lettering. He was particularly intrigued by the patterns generated by the bank’s geometric lathes. Some of these are shown on Stone’s Series C £5 note. “This new portrait had a better reception than Austin’s version. People thought the portrait was more realistic and her gaze was more relaxed,” according to the bank.

The next portrait came with decimalization on Feb. 15, 1971. Harry Eccleston designed a the portrait on a 50-penny note that shows her in an unframed portrait outfitted in the hat and robe of the Order of the Garter. It was never issued since the bank opted to make the seven-sided 50-penny coin instead.

Eccleston was not done. He executed two more portraits in the early 1970s — one for £1 and £5 notes, and another to be used on the £10, £20 and £50 notes. The bank describes the queen’s ceremonial dress on the latter three as creating a sense of formality and tradition.

From paper to polymer

The most recent portraits were designed by Roger Withington for the notes of 1990s and show only her face and neck. The museum quotes the Today newspaper as saying the bank portrayed the queen as “an ageing Gran with a bulbous nose and a double chin,” and The Times wrote, “God could not save our Queen from the designer.”

A variant of Withington’s portrait without the elaborate jewelry served as the watermark on the paper notes issued beginning in the 1990s.

These portraits are the ones with which we are most familiar and are still in use on the new polymer series that, given their putative durability. Explains the Bank of England: “The familiarity of this portrait helped create a sense of continuity when the Bank of England began printing notes on polymer in 2016. It’s a timeless image of a monarch who has been a feature of our banknotes for generations.”

Another change using the Withington portrait was introduced on the polymer notes. “Instead of a watermark, they feature a see-through window containing a smaller but clearly-defined version of the portrait,” according to the bank. 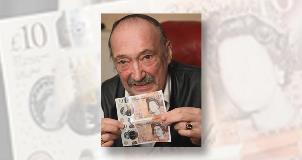 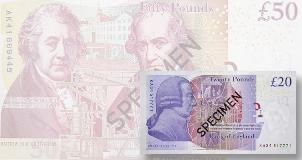 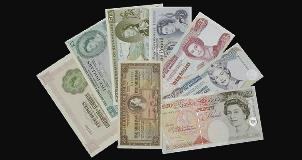