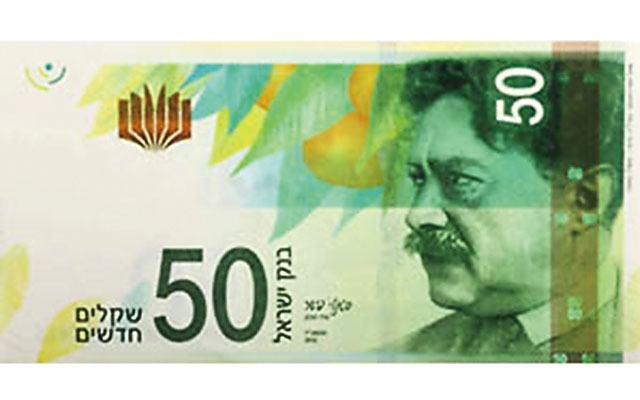 New designs for the 50-shekel note of Israel feature a portrait of poet Saul Tchernichovsky on the face. The back shows capitals of Corinthian columns in reference to parts of the poet’s compositions and his translation of ancient Greek literature.

Dr. Hagai Ben-Artzi said the use of a portrait of poet Shaul Tchernichovsky on the face of the new 50-shekel notes is “an outrage” and he called for a boycott of the notes.

Ben-Artzi said Tchernichovsky was “a symbol of assimilation, of assimilation ideology,” according to a Sept. 26 article published in the www.timesofisrael.com.

The poet, born in 1875, was said to have had a daughter, Isolda, with Russian-born Christian Melania Karlova. Ben-Artzi is the estranged brother of Israel Prime Minister Benjamin Netanyahu’s wife Sara, according to the article.

The note will begin showing up in circulation later in 2014, according to the Bank of Israel.

The face of the note features a portrait of Tchernichovsky along with images of citrus fruit and leaves.

Tchernichovsky’s poem, “Oh, My Land, My Homeland,” was the inspiration for the face design. The poem contains the words “the bouquet of spring orchards.”