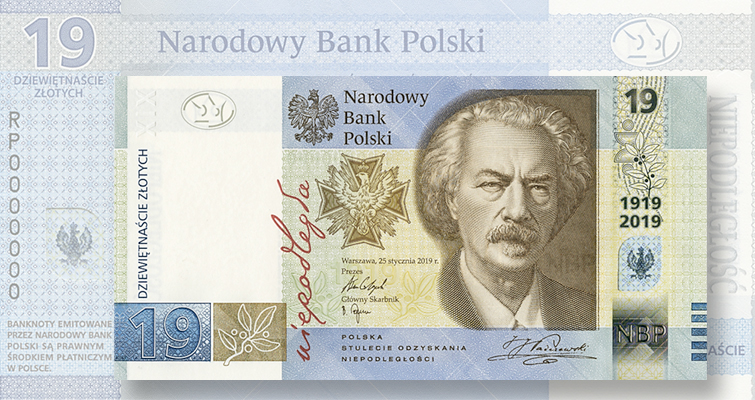 A new 19-zloty commemorative bank note in Poland’s Independence Series released by the national bank celebrates its printer’s century of work, 1919 to 2019. 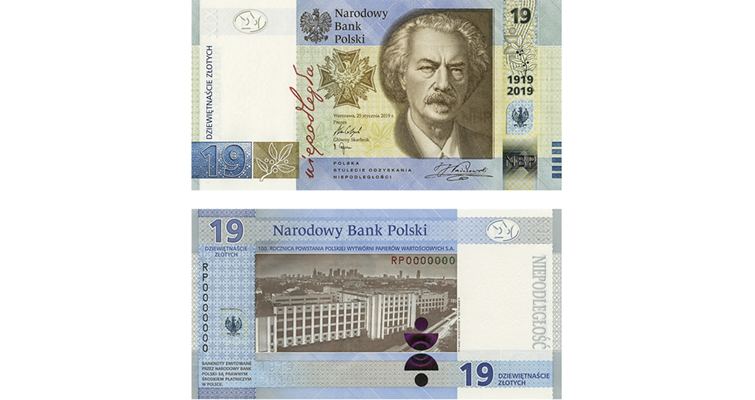 The 19-zloty note’s face portrays Prime Minister Ignacy Jan Paderewski, under whom Poland’s Council of Ministers established the security printer. The PWPW building is displayed on the back, the focus of a panoramic view of modern Warsaw.

A new commemorative bank note in Poland’s Independence Series was released by the national bank, Narodowy Bank Polski, on Oct. 2. With an issue limit of no more than 55,000 pieces, the unusually denominated 19-zloty note is not intended to circulate.

It commemorates the 100th anniversary of the Polish Security Printing Works (Polska Wytwórnia Papierów Wartosciowych), known as PWPW. The face value is a nod to 1919, the year of PWPW’s creation, as is the anniversary date of 25 January 2019.

The 150-millimeter by 77-millimeter note’s face has a large facing image of Prime Minister Ignacy Jan Paderewski, under whom Poland’s Council of Ministers decided to establish the facility. There is also a stylized image of the Order of the White Eagle next to the word “niepodległa” (“independent”) in cursive script. It is reproduced from a manuscript by revolutionary and statesman Józef Piłsudski and is the logo of the official celebrations of the 100th anniversary of Poland regaining independence after World War I. A latent image exclusively developed by PWPW, known as Umbra4Note, is incorporated into the image of a laurel branch symbolizing brotherhood and victory.

A view of the PWPW building is on the back, against a backdrop of a panoramic view of modern Warsaw. The PWPW logo is printed next to the building in optically variable ink. An iridescent stripe is also visible under UV light in the form of the number “19” and the abbreviation “NBP,” repeated alternately.

The PWPW’s story mirrors that of Poland in the 20th century. Until July 10, 1926, it operated under the name State Graphics Works (Panstwowe Zakłady Graficzne). Construction of a new building on Sanguszki Street in Warsaw began in that year and it remains the PWPW headquarters to this day.

A history provided by the bank calls the World War II era a particularly challenging period. The PWPW building was seized by the Nazis, yet, under the occupiers’ noses it served as the seat of the underground resistance group known as PWB/17/S. It was made up of PWPW workers, who risked their lives to print bank notes and documents for the Home Army, the primary Polish resistance movement. During the Warsaw Uprising, the building was one of the most important protective shelters used by the Polish freedom fighters.

Under the communist regime after the war, a modicum of normalcy returned and production was resumed in the rebuilt headquarters. From the start of the Third Republic in 1989 to the present, the bank has modernized to produce secure bank notes, identification documents, postage stamps and other types of security printings, not just for domestic orders, but also for export.The bank says the commemorative note is available at its offices and on the internet.

The note is the equivalent of approximately $4.75. 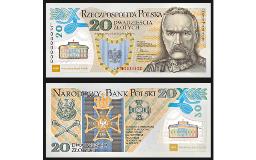