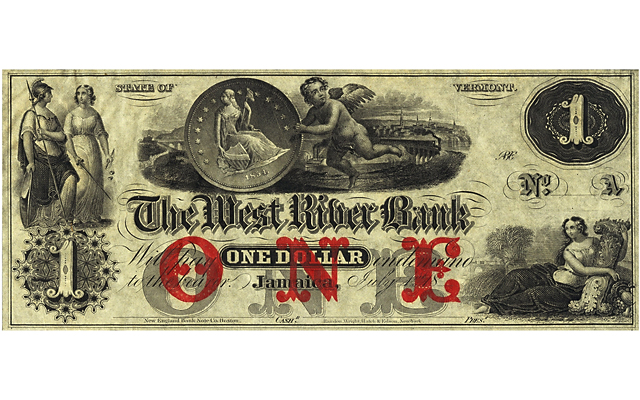 This $1 obsolete remainder note printed for the West River Bank in Jamaica, Vt., sold for $82 on July 8, 2014, by Heritage Auctions.

The pleasures of collecting obsolete notes may well be summed up in one such note sold for less than $100.

The never-issued uniface $1 remainder note was printed for the West River Bank in Jamaica, Vt.

It sold in an Internet auction by Heritage Auctions on July 8, 2014, for $82. The note was graded Choice About Uncirculated 58 Exceptional Paper Quality by Paper Money Guaranty.

A remainder note is an unissued note left over after its issuer stopped issuing the pieces. But that fact cannot veil the beauty of its design.

In fact, among the pleasures of collecting obsolete notes is the variety of designs that can be found on these little artistic gems.

Front and center is a winged cherub appearing to carry an 1854 Seated Liberty silver dollar, positioned in front of a scene of a harbor, railroad train and buildings.

Three allegorical female figures decorate the corners of the note, each with symbols that convey messages to the viewer eager to discern them.

In the upper left corner stands a helmeted figure holding a shield in her right hand and a spear in her left hand. She may well be the Roman goddess Minerva, who represents wisdom and a warrior.

Another figure holds a sword in her right hand and a set of scales in her left. She may have been based on the Roman goddess Justitia, representing justice, though Justitia is most often shown wearing a crown.

A seated figure holding a stylized numeral 1 in her arms appears in the lower right corner, with bundles of wheat, some grapes and possible a squash surrounding her.

These richly ornamented designs were not only pleasing to the eye but had a serious side as they served as security devices. In addition, the red overprinted world ONE above and to the right of the underprinting of the same word, might have given a counterfeiter some pause.