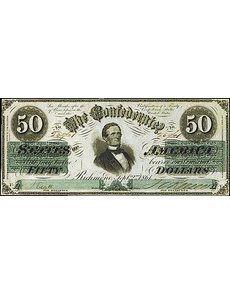 Did Confederate States of America President Jefferson Davis have one of these CSA $50 notes, with his portrait, in his pocket when he was captured by Union forces in 1865?

I would like to go back in time and pick Confederate States of America President Jefferson Davis’ pocket — twice; once midway through the Civil War and once at the end.

On April 2, 1863, about 1,000 whites, mostly women, rioted in Richmond, Va., over the shortage and price of food. Davis took command of the situation, but it cost him the contents of his wallet.

Bread riots broke out throughout the South that spring. Families, especially poor ones, were crushed by the twin hammers of poor harvests and outrageous inflation.

Food was scarce on the home front and prices, aggravated by the ruinous depreciation of Confederate currency, were up seven to 10 times over pre-war prices.

“This is little enough for the government to give us after it has taken our men,” Jackson reportedly replied when challenged.

The crowd ignored the governor and mayor, but built a barricade when Davis and an infantry company arrived.

Davis felt nothing but contempt for the rampaging crowd. He later wrote they were “bent on nothing but plunder and wholesale robbery.”

During the 1863 bread riot he stood on a wagon and yelled, “You say you are hungry and have no money.” He then emptied his pockets and threw the contents into the mob. “Here is all I have. It is not much, but take it.” He then gave the women and children five minutes to clear out or troops would open fire.

History does not record what was in Davis’ pockets that day but we know he did not throw his pocket piece — one of four 1861 Confederate half dollars — into the crowd. He still had it when he was captured two years later.

Patriotism and the law demanded that he use nothing but Confederate currency. His own portrait was on the newest $50 CSA note, a piece of paper money worth just $10 in gold and falling at that point in the war. (By the war’s end, it took 1,200 Confederate dollars to buy $1 in gold.)

In 1861, the New Orleans Mint struck four half dollar patterns with a CSA reverse. Confederate Treasurer C.G. Memminger gave one to Davis, who reportedly kept the half dollar as a pocket piece.

On May 10, 1865, Union forces captured a fleeing Davis, by some accounts disguised as a woman, at Irwinsville, Ga. Davis later told 19th century coin dealer J.W. Scott that the coin was taken from him then.