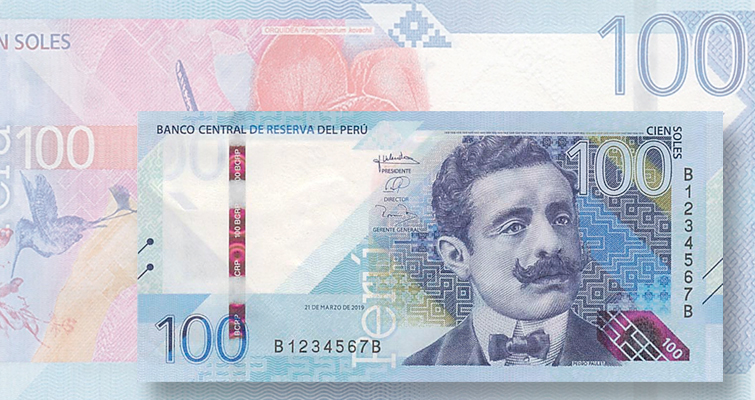 The first two denominations in Peru’s new family of bank notes, the 10- and 100-sol issues, were issued on July 22.

The first two denominations in Peru’s new family of bank notes, the 10- and 100-sol issues, were issued on July 22, with the 20- and 50-sol notes expected in a few months and a 200-sol note sometime next year. (One sol is 25 cents in United States currency.)

The Central Bank of Peru is dedicating the series to distinguished 20th century Peruvians from the arts and sciences, and its diverse flora and fauna. All the back sides will be printed in a vertical format for the first time in the country’s history.

The series is being printed by De La Rue, who won a design competition organized by the central bank in which it says all the world’s major bank note printers participated.

The subject of the 10-sol note is María Isabel Granda y Larco, also known as Chabuca Granda. She was an internationally recognized singer and songwriter who composed over a hundred songs based on Peruvian history and folklore. Her song “La Flor de la Canela” has become an unofficial anthem for the city of Lima. She died in Fort Lauderdale, Florida, in 1983 at the age of 63 with many projects unfinished. Her work was declared a Cultural Heritage of the Nation in 2017, and in 2019 the Peruvian government posthumously awarded her the Order of the Sun of Peru, the nation’s highest honor.

The back has an image of a vicuna, as a symbol of the country’s animal wealth. It also has a flor de amancaes (amancay) shown, which is referenced in Chabuca’s song “José Antonio.” The amancay is native to Peru. It blooms once a year in the coastal hills, especially near the city of Lima.

The 100-sol note is dedicated to Pedro Paulet, called by the bank a “multidisciplinary sage” — an architect, engineer, mechanic, chemist, economist, geographer, sculptor, diplomat, writer, lecturer, and visionary inventor. He was born in 1874 and even as a child he showed interest in space travel, thanks to reading Jules Verne’s From the Earth to the Moon. When he was 19, the government granted him a scholarship to study engineering and architecture at the Sorbonne.

He claimed he invented the first liquid-fueled rocket engine in the 1890s, although there were no witnesses to attest to it. In 1900, the bank’s biography states, he was the first to build a modern rocket propulsion system. Peru issued an 800-sol airmail stamp in 1974 that calls him “the father of astronautics.” He died in Buenos Aires, Argentina, in 1945.

The back shows a spatula cola hummingbird, a native species that lives only in the forest boundaries and the scrubland of a part of the northern Andes, and a Phragmipedium kovachii orchid, a species native to the Andean cloud forests of northern Peru. It is considered one of the most beautiful flowers in the world. 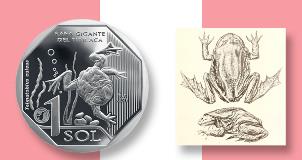 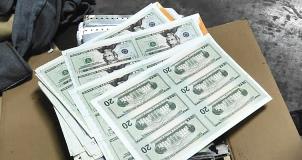 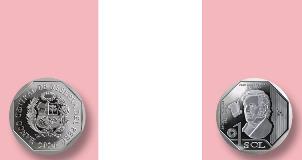