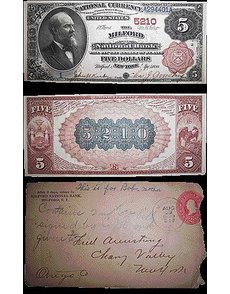 Second Charter, Series 1882 Brown Back $5 national bank note of the First National Bank of Milford (New York) was signed by Charles J. Armstrong as the bank’s president in 1899. He is related to the reader.

Attached are pictures of a $5 bill signed by a relative of mine, as well as the envelope it came in. The note has never been circulated and, up until a few years ago, it had sat in the envelope stored away folded in thirds. You can see the two fold lines going down. Not much I can do about that since that’s how they mailed it 100+ years ago.

The recipient of the $5 bill, Fred Armstrong, is where my middle name derived from, Frederick.

I’m curious obviously about the rarity of it, and the potential value of it. However, as a relative “newbie” to paper money, I would love an explanation of what the various numbers mean.

Reader Dakin submitted images of a Second Charter, Series 1882 Brown Back $5 national bank note of the First National Bank of Milford (New York), along with an envelope in which it was stored.

National bank notes were authorized by the National Banking Act of 1863. Under the act, the government was authorized to charter individual banks, which could then issue notes equal to 90 percent of the par value of U.S. government bonds that the banks had deposited as security for the notes to be issued.

The First National Bank of Milford was chartered on July 20, 1899, and like all national banks, was issued a charter number — in this case, number 5210. That charter number appears multiple times on the note, including in brown at the upper right of the face, vertically in black at the left side of the face and prominently in green at the center of the back of the note, plus in other locations.

The note also has a Treasury serial number at the upper right of the face, and a bank serial number, 1, below the portrait of President Garfield.

The federal government arranged for the printing of the notes issued by national banks, while the individual banks issued them into circulation locally. Many of the early notes were hand signed by the local bank’s leadership, as on the illustrated Milford note, which was signed by Charles J. Armstrong, bank president.

Armstrong and his father, John, in 1894 had constructed the Milford Steam Mill.

During its existence as a national bank, the institution issued $596,600 face value in notes. As of 1935, just $700 in large-size notes had not been redeemed.

A note from the same four-note sheet as the reader’s note realized $6,169 in a Stack’s Bowers Galleries August 2012 auction. The reader’s note, like that in the auction, is a serial number 1 note, making it especially desirable.