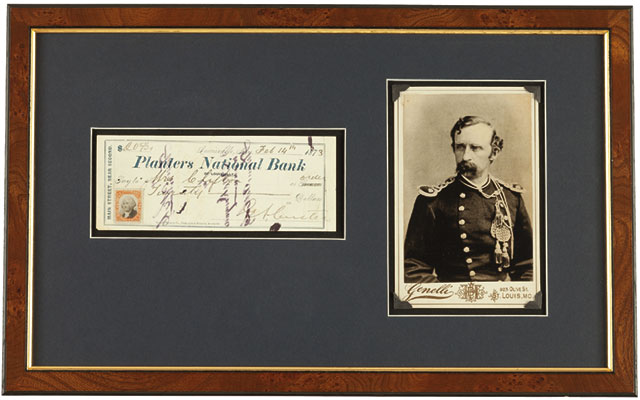 A custom frame displaying a personal check signed by Gen. George A. Custer along with a photo of him will be offered by Heritage Auctions in a Nov. 8 Legends of the West Signature Auction in Dallas, Texas.

A personal check from Gen. George Armstrong Custer for $20 will be offered by Heritage Auctions in a Nov. 8 Legends of the West Signature Auction in Dallas, Texas.

The check is characterized by the auction firm as being “in excellent condition, with a minor cancellation tear not affecting Custer’s signature. Endorsements on reverse have bled through, including one witnessing Mrs. Clifton’s ‘X’ signature.”

No pre-auction estimate was given but there was an opening bid online of $3,500 as of Oct. 29.

The check comes in a custom frame [11 by 18] and matted with a reproduction cabinet photo of Custer (on an original photographer’s mount).”

The check was made out to Mrs. Clifton and dated Feb. 14, 1873, bears Custer’s distinctive signature. The check was drawn on Planters National Bank of Louisville (Kentucky) “where Custer and the 7th [U.S. Cavalry] were stationed from 1871 to 1873, assigned to put an end to illegal distilleries and ferret out violent Ku Klux Klansmen and bushwhackers,” according to the auction description.

The catalog description states that Mrs. Clifton first met George and Libbie Custer when Clifton was married to an Army clerk while she served as the post’s laundress.

“But her husband [Clifton] deserted, taking with him the couple’s life savings. In 1872, she remarried, to Sgt. James Nash, personal servant of Custer’s brother, Tom. Amazingly, Nash also stole the family savings and deserted from the Army. Later in 1873 she married again, to Sergeant John Noonan of the 7th [U.S. Cavalry], who survived Little Big Horn, but died two years later.”