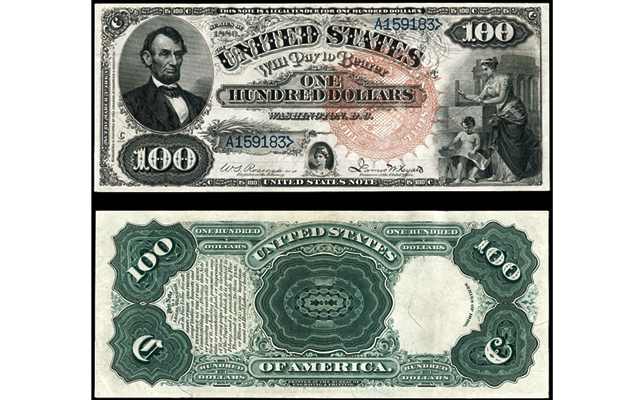 This Series 1880 $100 United States note in Extremely Fine 40 by PCGS Currency sold for $74,750 at the Lyn Knight Currency Auction in Memphis, Tenn.

The International Paper Money Show in Memphis, Tenn., June 13 to 15, reaffirmed two things: the continued strength of the paper money market, and the way the Internet has changed it.

The 131 tables on the dealer bourse reflected the full range of paper money collecting, a worldwide assembly of the esoteric and the popular. As always, it was one of the few paper money shows that offered more than a bourse floor, with exhibits, eight club meetings and 15 educational sessions, 11 of which were devoted to American subjects.

Dealers were uniform in their opinion that prices are sustaining their recent show of strength. Meredith Hilton of Kagin’s observed that the collector’s market “remained strong,” not just for high-grade rarities, but for common notes, as well.

Allen Mincho of Heritage Auctions remarked that as far as auction prices are concerned, he has never seen them so disproportionately higher than published dealer buy/sell prices. His colleague, Dustin Johnston, an auction director at Heritage, reflected more broadly on Memphis, noting that few shows offer more surprises for collectors in terms of newly discovered rarities. As for the overall market, Johnston felt that national bank notes were making a strong recovery after a long period of dormancy. While it has never been a problem to find willing buyers for what are called “trophy” nationals, today, Johnston said, “common and middle-level notes are also headed back in the right direction.”

The length of the sale in terms of the amount of time it took illustrates the second point. The Internet is now an entrenched element of the coin and paper money business, offering a partial explanation for the generally lower level of attendance on bourse floors, in retail sales, and perhaps most consequentially, in auctions.

As the Saturday session of the Memphis sale approached midnight, the reason was clear. Not only did the auctioneer need to pay attention to the those in the room, the bids he had in his book, and those on the phone, but to a fourth source — those bidding online.

It makes it easier to bid and makes the hobby accessible to a wider audience. Some feel (correctly or not) that, thanks to third-party grading, it is no longer necessary to physically inspect notes.

Still, we must ask if the lack of personal contact is a good thing.