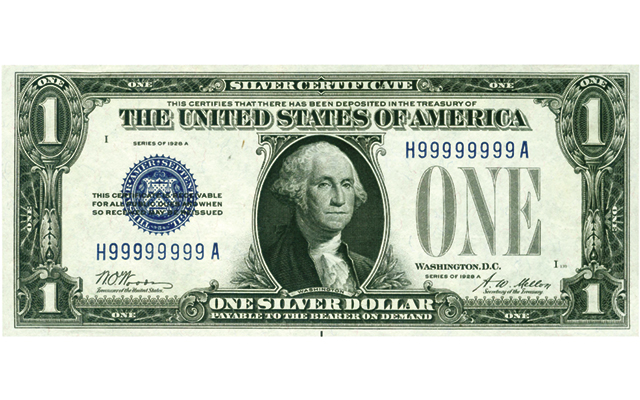 The Wall Street Journal and humorist Stephen Colbert both recently profiled collectors of notes with fancy serial numbers. This $1 silver certificate has serial numbers that are solid 9s, which make it highly desirable to collectors.

The term "notaphilists" is not widely known or used, but it recently gained some attention outside of the collector community.

The Wall Street Journal is reporting that one of America's most niche hobbies still has enthusiasts (notaphilists, or paper money collectors) hunting for that unique serial number on their note. Humorist Stephen Colbert also examined the collecting speciality, though with his trademarked sense of humor.

Quoting from the Wall Street Journal: “ 'I thought the Colbert bit was funny, even though it’s always a little painful to have people mock your hobby,' says Dave Undis, a longtime fancy-serial enthusiast who has written about the hobby and runs CoolSerialNumbers.com, a website dedicated to fancy bank notes.

“ 'People see stuff like that and they start looking in their wallets and start thinking they’re going to get rich,' says the 61-year-old Mr. Undis, a retired insurance executive in Nashville, Tenn."

"Spanish exploration is widely remembered today thanks to Christopher Columbus, but Portugal battled the Spanish in a race to explore the globe during the Age of Discovery."

The gold coin is said to be struck in 1510, sometime before January and August at a local mint in Goa — one of the three outposts established by the Portuguese.

Here's a look at the extremely rare coin

3. There's a rare note at the end of the 'rainbow'

"With Nearly 750 examples recorded, the Series 1869 $5 United States note, also known as the “Rainbow Note” (Friedberg 64), and its famous pioneer family is anything but rare."

See what makes this note rare