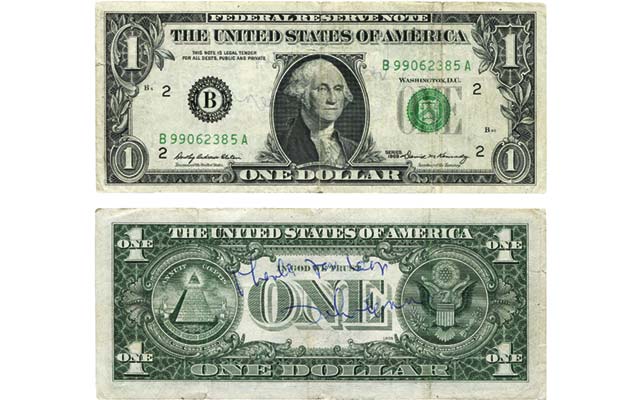 The back of this common and rather worn Series 1969 $1 Federal Reserve note bears the autograph of John Lennon. The note is being auctioned by Sincona AB May 18. 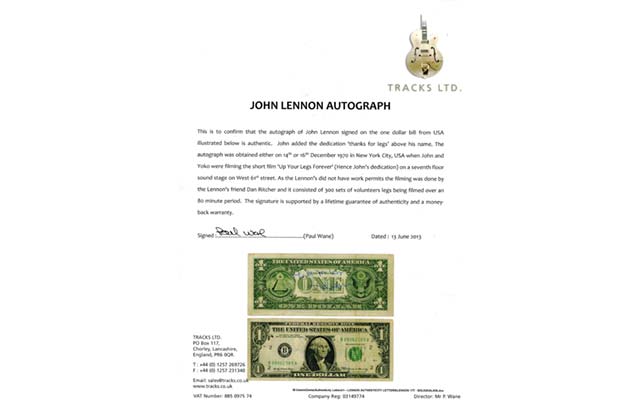 It makes no sense that this very common Series 1969 $1 Federal Reserve note with multiple folds and tears would bear an estimated selling price of 3,500 Swiss francs ($3,640 in U.S. funds), until one looks at its back. It is only then that a few handwritten scribbles move it from numismatics to the worlds of music and international pop culture.

Scrawled in blue ink in the center back is an inscription and the signature of Beatle John Lennon. The note is clearly the most unusual of the 770 lots of currency in the auction being held by Sincona AG on May 18 in Zürich.

After the Beatles broke up in April 1970, Lennon and his wife, Yoko Ono, began a number of projects, including an experimental film. The film, known today as Legs for Peace, (originally Up Your Legs Forever) would not be an Oscar candidate. It is about 75 minutes long and contains nothing but 8- to 12-second segments of 367 different pairs of legs shot from the toes to mid-thigh. The film was made in December 1970 at the Syndicate Photo studio on 61st Street in New York City.

Lennon and Ono did not have work permits, so the filming was done by the couple’s friend Dan Richter. On Dec. 14 or 16, the son of the studio’s owner was there to take some photos of the set. When asked by John if he wanted to be part of the film he jumped at the chance and said, “Sure, why not?” Only then was it revealed that the young man was wearing a prosthetic leg because of an amputation (later he would also lose his other leg). After shooting the scene, he asked Lennon for an autograph. Lennon took out a $1 bill and wrote “Thanks for legs / John Lennon” — somewhat macabre in view of the amputation.

The bill has been consigned by an anonymous owner and comes with a certificate of authentication from one of the world’s leading Beatles memorabilia dealers and experts (Tracks Ltd., Chorley, Lancashire, Great Britain).