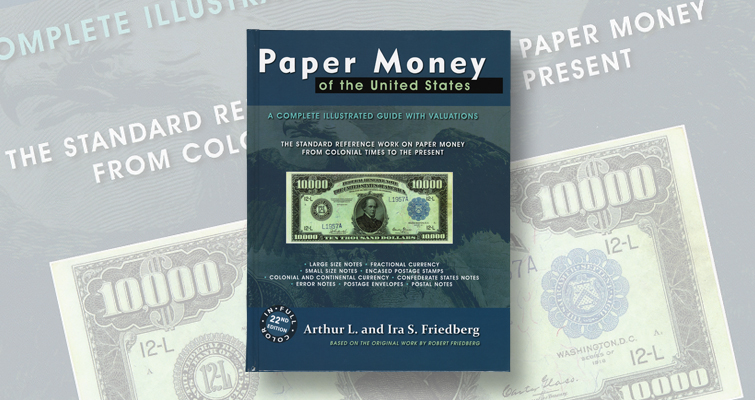 The 22nd edition of Paper Money of the United States, widely seen as the standard reference book on American paper currency, has been released by the Coin & Currency Institute.

In 1953, the late Robert Friedberg (1912 to 1963) broke new ground when the Treasury Department granted permission for photographs of American paper money to be printed for the first time. The current edition’s 328 pages feature notes from America’s greatest currency collections, as well as most of the greatest rarities, all reproduced in color. During the past three decades, it has been completely expanded, revised, and edited by Arthur L. Friedberg and Ira S. Friedberg, sons of Robert.

The 22nd edition of Paper Money of the United States, as any price catalog, is a snapshot in time — and as the new edition debuts, it reflects a stable market for paper money, with notes of great rarity or top quality often setting price records every time they are sold. All valuations are adjusted to reflect market conditions, which are mostly up. Prices are given in up to seven states of preservation, from Very Good (VG-8) to Gem Uncirculated (Gem 65).

In addition to a new format that the publisher asserts is easier to read, the 22nd edition also has several other significant additions and revisions, including notes not before known to exist.

From the first year of federal paper money, 1861, to the present, the faces and backs of all classes and types of currency, in denominations from 3 cents to $10,000, are illustrated. These are accompanied by text listing, describing and pricing every variety of paper money ever issued — more than 10,000 prices in all.

With close to 1,000 color photographs, the result is a complete pictorial, descriptive and numismatic history of the currency of the United States, according to the publisher.

There are supplemental sections on Continental and Colonial Currency (notes issued from 1680 to 1788), the Treasury notes of the War of 1812, considered by some to be the first national paper currency, a comprehensive listing by type of the issues of the Confederate States of America, and sections devoted to paper money errors, postage envelopes, a new section on postal notes, and encased postage stamps. The latter three forms of currency, along with fractional currency, were created to alleviate the shortage of change needed for commerce during and after the Civil War.

The listing in the Appendix of the 14,348 national banks that operated from 1863 to 1929 also shows the number of notes known to exist for each note-issuing bank. The Appendix also includes information on uncut sheets of small-size notes, including the modern issues sold by the Bureau of Engraving and Printing.

Paper money collectors depend on the Friedberg Numbering System, a uniform method of cataloging bank notes that is the international standard for American currency. This numbering shorthand, along with the hundreds of photographs, is designed to enable anyone to locate a specific bank note, and allows a dealer to advertise a note without need of extensive description.

A panel of acknowledged experts on paper money has assisted the authors, enabling them to establish accurate and up-to-the minute valuations for all issues.

The book is printed in the United States and is available in three formats. A low-price, easy to carry softcover version is $45.95. A long-lasting, hardcover copy with sewn binding is priced at $69.95. E-book editions are priced at $29.95 either on a USB stick (for PC only) or as a digital download (suitable for multiple formats), where it is also available as a one-day rental. The books are available or may be ordered from bookstores, coin and paper money dealers, and from internet book sellers.

Copies may also be obtained from the Coin & Currency Institute, P.O. Box 399, Williston, Vermont 05495. Shipping is free in the United States. Call toll-free 800-421-1866. Contact the publisher by email at info@PaperMoneyoftheUS.com. 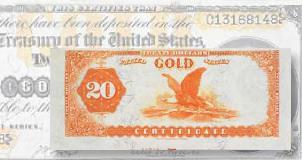 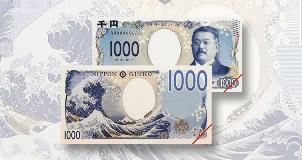 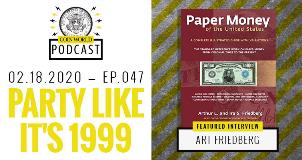 Party like it's 1999: Impeachment collectibles, paper currency, and Art Friedberg