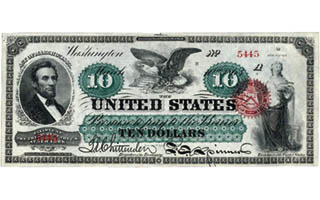 This Series 1863 $10 United States note sold for $6,900 at auction March 7. The note, which depicts Abraham Lincoln, was graded Choice Uncirculated 64 Net by Paper Money Guaranty due to repairs.

It is regrettable, therefore, that their existence may lead some to conclude that collecting U.S. paper currency is exclusively a rich man’s game.

Nothing can be further from the truth. To take a look at the broader reality, we only need to consider the multisession Lyn Knight Currency Auctions sale held March 6 to 9 in conjunction with the Chicago Paper Money Exposition.

One floor session consisted of 205 lots of large-size notes, the most widely recognized paper money category. Just 58 of the total lots had opening prices of more than $1,000. The vast majority were graded Very Fine or higher, and many were not graded by third parties.

The emerging pattern is that the higher the grade and the rarer the note, the more likely it is to have an independent grade. And even though there is nothing wrong with submitting cheaper notes for grading, a level exists at which the cost of grading becomes a significant portion of a note’s selling price.

In a March 7 session, 283 lots of small-size “fancy” notes were offered, all part of the Mel Wilmore Collection.

Those lots included notes displaying low serial numbers, solid serial numbers (e.g. 88888888), and ladders, in which the digits move up or down in numerical order. “Fancy” notes are never easy to find, and such notes are almost never found in circulation, making it understandable that these otherwise common notes each went for hundreds if not thousands of dollars.

The note was graded by PMG as a Choice Uncirculated 64, Exceptional Paper Quality. According to the catalog description, “a total of only eight solid serial numbered $2 1953 – 1963 Legal Tender Notes were printed” (United States notes are sometimes called legal tender notes).