Reassessing the U.S. paper money market at the midyear point 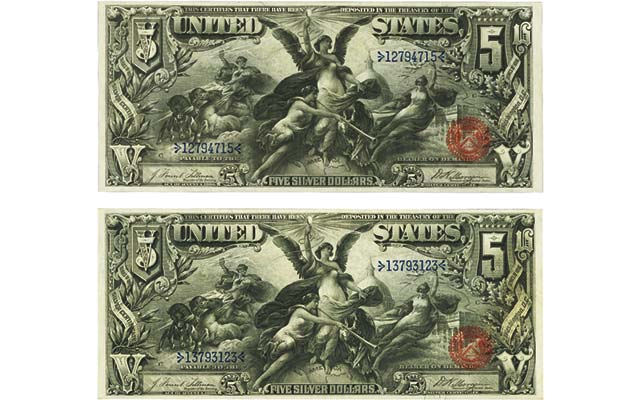 As paper money collectors awaited the annual International Paper Money Show in Memphis, Tenn., from June 18 to 21, they had a chance to review the state of the various sections of the market at midyear.

The glamour and attention has historically always gone to large-size type notes, and it still does. The diversity of types and designs makes most of them easy to collect in the lower grades, where some prices may have softened a little but are stable. Higher graded notes and rarities have for the most part gravitated to the auction market, where the number of sales and the quantity of individual lots in each sale are plentiful, and where the momentum of the market shows no signs of weakening.

Several changes in the way better notes are handled have by now been institutionalized. The first is the market’s insistence on third-party authentication and grading. Second is the expansion of grades in the Uncirculated category. The market progressed from one grade a generation or two ago, to three — Uncirculated (60), Choice (63) and Gem (65) —  and now to 11 grades from Uncirculated 60 in numerical sequence all the way to the theoretically perfect Gem Uncirculated 70. Third, within the Uncirculated grades, “extra credit” is given for outstanding paper quality. It is somewhat hard to explain how a note at the very top grade could possess inferior paper.

Collecting at this elevated level is not for the faint-hearted or inexperienced, in which case working with an veteran dealer is a wise decision. The appeal of a superb quality note can result in price differences of geometric multiples between, for example, items graded Gem 65 to Gem 68.

In some ways, the small-size note market is catching up, particularly within the categories of early silver certificates, legal tender notes, star notes, and especially, high denominations. Despite what at first glance appeared to be a recent glut of the latter, all notes offered were absorbed into the market at strong prices. Small-size notes in the highest grades with good paper, margins and embossing are bringing exuberant prices, as are ones with low and other special serial numbers. Error notes draw attention in every sale with prices remaining strong and consistent.

Some national bank notes are truly rare, and, when offered, command attention and high prices regardless of condition. Part of the appeal of national bank notes is the potential for the discovery of things previously unknown. The past year alone at least half a dozen such notes have come to light. Usually discoveries take the form of a new type from a bank or a state. Last year one even warranted the creation of a new Friedberg number (545a) for a series 1882 Date Back $10 note.