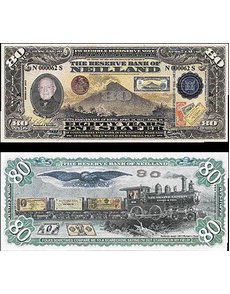 This $20 national bank note issued by the First National Gold Bank at Petaluma (California) sold for $47,500 during the show. 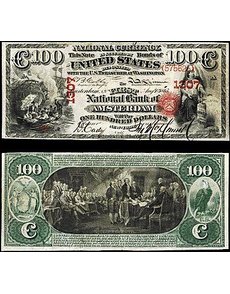 An Original Series $100 national bank note issued for the First National Bank of Amsterdam (New York) brought $80,000 at auction during the International Paper Money Show in Memphis, Tenn., June 14 to 16.

The note was auctioned during the Lyn Knight Currency Auctions sale at the show.

The note, considered likely to be the third finest known in private hands, was graded Very Fine/Extremely Fine by the auction house, which referenced some splits restored along the edges. The note is cataloged as Friedberg 454 in Paper Money of the United States by Arthur L. Friedberg and Ira S. Friedberg.

A Series 1891 $10 silver certificate, F-344 graded VF-35 Premium Paper Quality by PCGS Currency, sold for $50,000. The note has three folds observable under “close scrutiny,” according to the catalog description.

A $20 national bank note issued by the First National Gold Bank at Petaluma (California), F-1157, sold for $47,500. According to the catalog description, only two $20 notes are known from this bank and this example is “unique because it was printed on white paper rather than gold paper.” The catalog also stated the note had been professionally restored.

Those notes and more than 3,000 other lots of U.S. and world notes were offered in the June 13 to 16 live auction. Lyn Knight, owner of the firm, said the sale held in Memphis realized in excess of $6 million.

Contact Lyn Knight Currency Auctions at www.lynknight.com or telephone the firm at 913-338-3779.

Paper money collectors were seen on the bourse floor and in attendance at club meeting and other educational sessions during the IPMS. But again this year, as was observed at last year’s show, dealers and collectors were saying attendance seemed lighter.

The ease and convenience of buying collectibles from online auctions and dealer websites continues to make an impact on the world of collecting, several dealers observed.

Ability to accomplish collecting goals at home coupled with increased airline, hotel, gasoline and other travel costs apparently makes deciding to show up in person at shows a hard decision.

However, one person who always enjoys himself while attending paper money and coin shows is researcher and author Neil Shafer.

This year marks the 80th anniversary of his birth, and to celebrate he commissioned fantasy notes denominated in “80 years.”

The “note” features a photo of Shafer on one side along with images and text filled with references to his collecting speciality, coins and notes of the Philippines.

The other side depicts a locomotive with several train cars called the “Shafer Express.” A tiny image of Shafer and his wife, Edith, can be seen within the locomotive’s cab, and the names of family members appear on the sides of the railroad cars’ trucks.

The note is full of puns, another Shafer speciality. One example is printed on the fantasy note: “If I could make everyone in the country wear size 12 shoes that would be no small feat.”

Aside from the puns, Shafer may be best known for his works A Guide Book of Philippine Paper Money and Philippine Emergency and Guerilla Currency of World War II. He has also written or contributed to a variety of U.S. and world paper money books since the 1960s.

Members and guests of the Society of Paper Money Collectors witnessed the presentation of the Forrest Daniel Award for Literary Excellence to Mark D. Tomasko for his book The Feel of Steel — The Art and History of Bank-Note Engraving in the United States, 2nd edition.

The award was made during the society’s 52nd annual breakfast and fundraising raffle on June 14.

Also during the breakfast, the society presented its Wismer Award for the 2012 best book of the year to co-authors Pierre Fricke and Fred Reed for their History of Collecting Confederate States of America Paper Money 1865-1945 Volume 1.

The Nathan Gold Memorial Award for lifetime achievement and service was presented to Frank Clark. Clark has served as president of the SPMC and is currently the society’s membership chairman.

Third-party grading service PCGS Currency was presented with the Nathan Goldstein Membership Award for being the top new member recruiter in 2012.

Outgoing SPMC President Mark Anderson presented three members with President Awards — Benny Bolin, Robert Moon and Allen Mincho and Len Glaser. The awards recognized the recipients’ help to him and their service to the society.

For more information about Society of Paper Money Collectors, contact the society’s membership director, Frank Clark, at Box 117060, Carrollton, TX 75011-7060, or visit the society’s website at www.spmc.org. For more information about the 2014 show, visit the website at www.memphisipms.com, or contact IPMS bourse chairman Doug Davis by directing email to doug@memphisipms.com. ¦