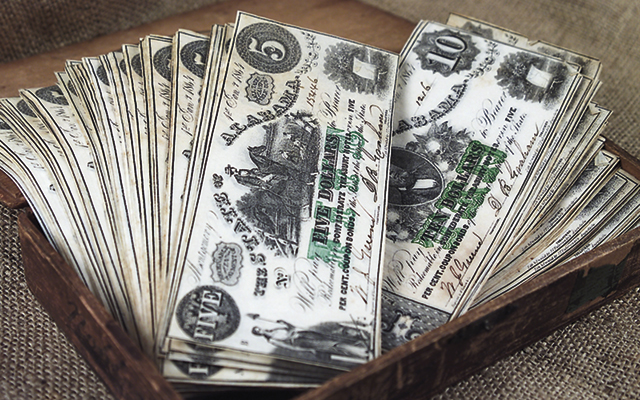 These 1864 Alabama state notes, each hand-signed and numbered, were part of a stack of notes purchased from a family by Littleton Coin Co. in 2002. 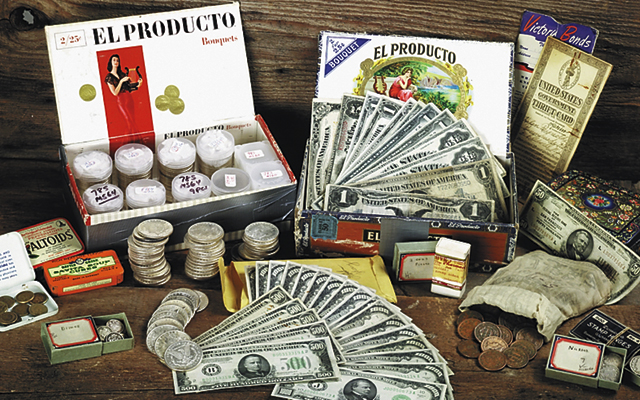 In 1996 coins and paper money were found stashed in cigar boxes, pill tins and other containers on a farm in East Orange, Vt. Among the items shown here are Morgan dollars, $500 and $1,000 Federal Reserve notes, and large-size $1 notes of various designs.

Make sure you read the first two posts of the series:

Some people may remember the name D.B. Cooper, the man who skyjacker an airplane in the northwest and jumpted from the plane with $200,000 in ransom cash, a portion of which was found in 1980 by an 8-year-old boy in Washington.

Though not everyone can make such a find, sometimes paper money is rediscovered in hoards. Throughout the years, Littleton Coin Company in Littleton, N.H., has been involved with the sale of notes, as well as coins and tokens, found in hoards.

In 2002 a family sold more than 300 Alabama state bank notes, each note individually hand-signed and numbered, to Littleton.

According to the Littleton website, the family had owned the stack of 1864 Alabama notes for more than 135 years.

“Still looking much as they did when printed in Montgomery [Ala.,] over a century before, the Crisp Uncirculated $5 and $10 notes presented a window on the Confederacy with their vignettes of plantation life,” according to the Littleton website. Littleton’s buyers bought more than 300 of the notes, each of which was individually hand signed and numbered.

In 1996, from another hoard of coins, paper money, tokens, bullion and antique cars, what Littleton called the Vermont Yankee Hoard, the firm purchased 17 $1,000 Federal Reserve notes and five $500 FRNs.

The hoard was discovered early in 1996 on the property of the late Alexander and Imogene Miller of East Orange, Vt.

Other items in the hoard included gold and silver bullion, stock certificates, and antique automobiles.

Various safes and hiding places on the Miller’s property — including beneath the floorboards of an abandoned schoolhouse building on the grounds — held nearly $900,000 worth of gold bullion and more than $100,000 in gold coins. The silver bullion consisted mainly of 70-pound ingots that resembled loaves of bread. In addition there were several antique cars, estimated to be worth $1.8 million.