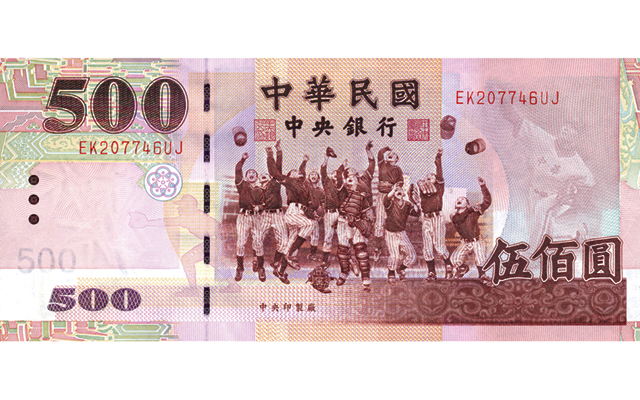 This 500-yuan note of Taiwan shows a Taiwanese Little League Baseball team celebrating a win, possibly during one of the many Little League World Series baseball tournaments that Taiwan teams have won through the years.

Fact-based and fictional stories and poems galore have been written about the game of baseball and its players.

Even the hobby of paper money can lay claim to a place in the baseball universe. Notes issued by governments, advertising notes using a baseball-theme, and stock certificates issued by professional baseball organizations would make a great specialized collection.

One seemingly “must have” note is from baseball-crazy Taiwan. The island nation, off the coast of the People’s Republic of China, is the only nation that has issued paper money depicting its favorite sport.

The baseball-themed design was introduced in 1999 on the Taiwan 500-yuan notes. The face design shows the members of a Taiwanese Little League Baseball team celebrating a win. Teams from Taiwan have won many Little League World Series baseball tournaments in Williamsport, Pa., through the years.

Also on the face side, just to the left of the main vignette is the outline of a fielder holding out his glove to catch a hit. To the right of the Little League vignette is an image of a Taiwan baseball player, possibly representing the nation’s professional baseball league. The back design features a group of Sika deer.

Baseball was introduced to the island nation in the late 1800s. The first Taiwanese-born player in Major League Baseball in the United States was Chin-Feng Chen, who played with the Los Angeles Dodgers in 2002 to 2005. In 2006 he moved back to Taiwan and now plays in the Chinese Professional Baseball League.