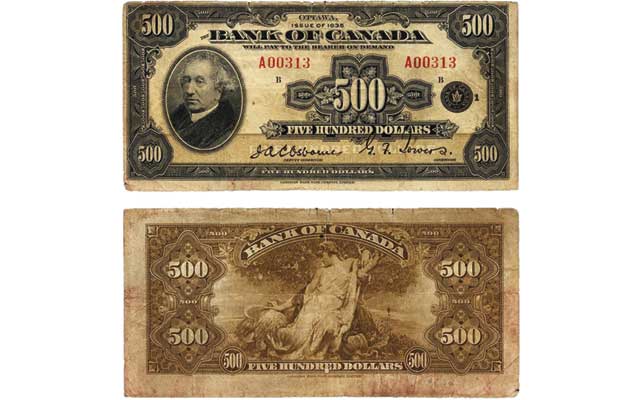 The June 18 auction of world paper money confirmed the growing “International” aspect of the Memphis International Paper Money Show. The size of the crowd in the Sheraton Hotel ballroom exceeded that for the session devoted to U.S. large-size notes the next day.

According to Joel Shafer, world paper money specialist for the auction firm, Lyn Knight Currency Auctions, results were strong across the board and were characterized by good floor activity to accompany live participation over the Internet and mailed-in bids.

The top grossing note in the international session was a Pakistani Haj 100-rupee issue from 1950. These notes were issued due to currency controls and are overprinted FOR/PILGRIMS FROM PAKISTAN/FOR USE IN/SAUDI ARABIA AND IRAQ. It brought $76,375 including the 17.5 percent buyer’s fee in Choice Fine/Very Fine condition. Next, with an estimate of $35,000 to $50,000 and a final price of $58,750, was one of the first and rarest Bank of Canada notes, a $500 issue of 1935. It was graded by Paper Money Guaranty only Very Good 10, but fewer than 10 are known.

A French collection of close to 50 notes, according to Shafer, did surprisingly well, and a Philippine collection of 61 notes was consistently strong, led by a Philippine National Bank 20-peso note with 1919/1912 overprint in Fine at $12,925; there are said to be fewer than five examples known.