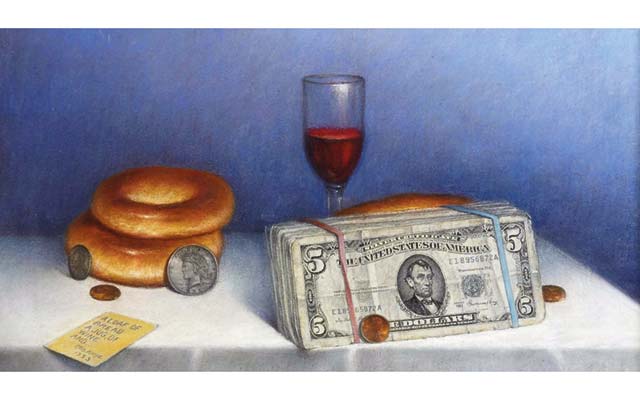 Although Kaye’s work has sold for more than $400,000 at auction, his less-expensive works occasionally are offered at smaller auctions. This 1953 pastel titled A Loaf of Bread, a Jug of Wine and... sold for just $2,500 at a 2013 Bonham’s sale in Los Angeles. Included in the still life is a rendition of a 1935 Peace dollar. 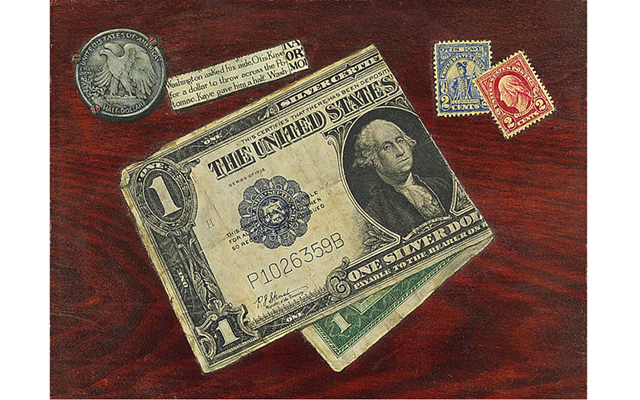 Kaye’s realistic paintings including money occasionally come to auction, such as this one that brought $10,625 at a 2012 auction.

An exhibit titled “Otis Kaye: Money, Mystery, and Mastery” runs though May 10 at the New Britain Museum of American Art in Connecticut.

The following is the second of two posts focused on the art of Kaye, who often includes coins and paper money in his work:

Otis Kaye’s works appear at auction occasionally. For example, a small oil on wood panel painting titled Washington and the Half-Dollar, after 1919 depicting a folded silver certificate, the reverse of a Walking Liberty half dollar and two stamps along with a clipping stating in part, “Washington asked his aide, Otis Kaye for a dollar to throw across the Potomac. Kaye gave him a half” sold for $10,625 against an estimate of $6,000 to $8,000 at a Nov. 19, 2012, auction by Doyle’s New York.

One of the finest examples of his work is currently on loan to Ohio’s Columbus Museum of Art and is being offered by New York American art dealer Jonathan Boos. The large oil on panel painting from the 1940s titled U.S. Musical Notes shows the artist’s love of puns and his masterful illusion painting techniques.

As Boos notes, the term “notes” refers to both the depicted bank notes and musical notes. He adds, “Kaye inserted his own name into the work twice: in the stopwatch and in a quote that can be read on the scrap of newspaper that bears the date October 18, 1937. The quote reads: ‘Rev. Otis Kaye said, “Stop fiddling around chasing money. ...” ’ Kaye’s financial situation fluctuated throughout his life, as alluded to in the present painting.”

The money theme can be seen even in the compositional choices the artist employs, including where the violin and notes form a dollar sign.

Cleverness is central to the charm of these trompe l’oeil paintings.

As the introduction to the exhibition states, “Trompe l’oeil is distinguished not only by its realism or shallow perspective but also by its wit. In the best trompe l’oeil, the artist deliberately sets out to trick you and, most important, to let you know that you have been tricked.”