Online auction offers photo with design of $100 FRN on fire 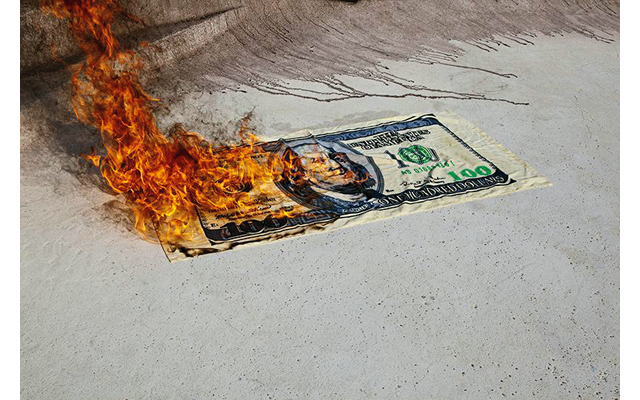 Photograph of a burning beach towel with the design of a $100 Federal Reserve note is offered for auction on iGavel. The auction ends Feb. 4.

A photograph of a beach towel — featuring the design of a $100 Federal Reserve note — on fire is being offered in a photography auction, presented by Daniel Cooney Fine Art through the website iGavel. The auction will end Feb. 4, 2015.

The photograph, titled “Burning Bill,” was made by Geoffrey Ellis, staged in the bottom of an empty swimming pool at an abandoned motel near Las Vegas.

Ellis said the photograph is from “a project called ‘Valley of the Meadows’ that looks at both the excess and vice of Las Vegas. The Las Vegas I imagine is one not too divorced from reality, where the extremes of luxury and vice are out in the open and the lure of promise draws one in. It is a place that is as seductive as it is repellent.”

Ellis is a co-founder of the Vegas Vernacular Project, and founder of the Las Vegas Camera Club. He earned a masters in fine arts in photography from the University of Hartford Art School. He splits his time between San Francisco and Las Vegas. His website is www.geoffreyellis.com.