The Joys of Collecting: Keep numismatics a hobby 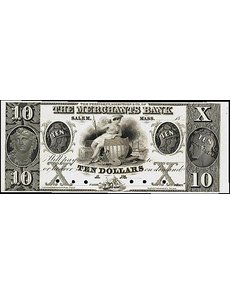 An early 19th century bank note from Massachusetts – a series for which there are many unknowns, but one that can furnish many years of enjoyment. Collectors would benefit from a speciality that will occupy them for years.

I have been busy writing a new book, Coins and Collectors, Part 2. Although it is hard to believe, the 50th anniversary of my first book is coming up quickly.

The hobby has changed, and dramatically since then. I still think of numismatics as a hobby — but I have been outvoted by practically everyone. The preferred term is “industry,” including in the title of the Industry Council of Tangible Assets. I think of an industry as a manufacturing milieu, once with smokestacks, now with robots.

If a work task is repetitive, chances are that plans are afoot to create a robot to do it. As wages increase, robots become more cost effective. Perhaps a few years from now if your self-driving car takes you to McDonald’s there will be no workers inside. Robots will make and serve the food and scan your credit card — or perhaps view the irises of your eyes, recognize you and make an appropriate charge. Do we really want numismatics to be an industry?

As a traditionalist I like the good old days. The hobby in 1964 bears little relation to today. Back then a client would write to say that, for example, he or she was building a set of 144 silver commemorative coins from 1892 to 1954. As agent I would look out for ones with nice eye appeal, buy them, and then send packages to my buyer. Perhaps within a year, possibly two, the collection would be complete. In the meantime we would each enjoy corresponding or talking on the phone.

Today, instant gratification is the norm. Someone discovering commemoratives can go on the Internet and complete a collection in an afternoon! Is this exciting to do? Again, is automation desirable in numismatics?

The Internet and other modern improvements increase the cycling speed of activity. Many collectors burn out within a year or two. It is not at all unusual for someone to buy coins, even rarities, in a Stack’s Bowers Galleries auction, then tire of the pursuit and consign them back to us within a year. The thrill of the chase is gone.

It has been suggested that if you stay with numismatics for five years, you will be a collector forever. Most newcomers will be long gone by then.

What is the solution? How can you prevent this from happening?

Here is my suggestion: Pick a series that is challenging to collect. Perhaps early 19th century bank notes from Massachusetts. Or one each of every merchant who issued Civil War tokens. Dozens of interesting fields await you! You will experience exactly the same thrill of the hunt that readers of my first book did back in 1964!