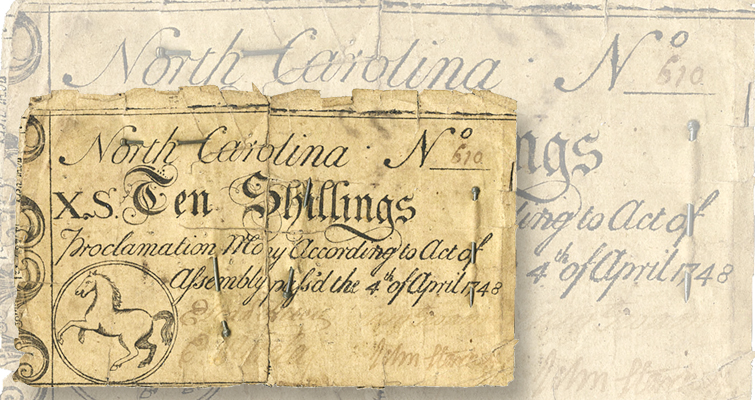 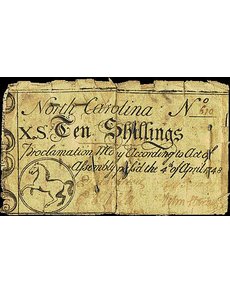 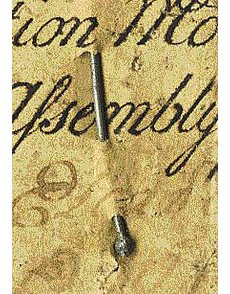 I collect the odd and curious areas of paper money in addition to mainline aspects like Ohio and Indiana obsolete notes and Confederate notes.

One newfound joy is Colonial and Continental currency. Most Colonial collectors seek notes from each of the 13 colonies (plus Vermont) or from a specific Colony or perhaps Continental issues made by the Continental Congress.

However, I prowl auctions and dealers’ stock for notes that are not pristine examples but rather have survived — barely — in battered and tattered form. Specifically, notes that have been pinned or sewn together.

A bit of history is in order. Colonial paper money has been around since the first Province of Massachusetts Bay notes of 1690 were emitted. Coins were hard to come by in Colonial America. Most of what did circulate was a grab bag of English, Spanish and Portuguese coins and their counterfeits along with a smattering of Colonial and private issues.

This coinage was hardly the basis for a budding economy and the allure of paper money was that it was easy and inexpensive to produce. While many of the early issues were redeemed, later issues of both Colonial and Continental currency often succumbed to the temptation of over-issuance.

As needs grew, particularly after the start of the Revolutionary War, the temptation to “run the presses” became irresistible. And with the increases in circulation, values dropped. By late in the Colonial/Continental period the currency had become so devalued that derisive terms like “shinplaster” (notes were only worth using as bandages and shoe sole patch material) and “not worth a continental” (the equivalent of worthless) became commonplace.

Even given all of that, if paper money was all that you had, then it had value because both parties said it did. These notes often circulated until they were literally falling apart.

At that point, emergency restorations were made to keep the notes circulating a bit longer. Two commonly seen approaches are two pieces of a note sewn back together or onto a backing with needle and thread, and notes that were pinned together with straight pins. These notes are typically quite inexpensive because condition conscious collectors tend to shun them as being in “deplorable” condition.

My take on them is somewhat different. They represent wonderful artifacts of our nation’s history, illustrating the extremes to which people would go in order to have some means of conducting trade. The fact that someone took the time some 250 years ago to conserve these notes is the only reason many of them are still with us today.