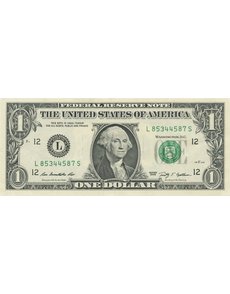 A provision in the Consolidated Appropriations Act for 2014 forbids the U.S. Treasury Department and the Bureau of Engraving and Printing from using any 2014 funds to redesign $1 Federal Reserve notes.

Numismatics has a brief, cameo role in the 1,582-page 2014 Omnibus Appropriations Bill.
Three provisions in the massive federal spending bill forbid the redesign of the $1 Federal Reserve note; construction of a U.S. Mint museum; and the consolidation of the Mint and the Bureau of Engraving and Printing.
The massive Omnibus Appropriations Bill will fund federal agencies through Sept. 30, 2014, the end of Fiscal Year 2014.
On Jan. 14 the House approved the bill and the Senate followed with its approval on Jan. 16. The bill, also known as the Consolidated Appropriations Act, was signed into law by President Barack Obama on Jan. 17.
All three provisions are included in sections of Title 1, Division E, of the Financial Services and General Government Appropriations Act 2014, which funds the U.S. Treasury Department.
$1 FRN redesign
Section 113 states the Treasury Department and the BEP cannot use any 2014 appropriations “to redesign the $1 Federal Reserve note.”
Several bills are pending in the 113th Congress urging greater circulation of the Presidential, Sacagawea and Native American dollar coins. Other legislation seeks improvements to the operation of the Federal Reserve System while another bill seeks the abolition of the system entirely. None of these bills specifically seeks redesign of the $1 FRN.
Treasury and BEP officials continue to say they have no plans to redesign either the $1 or $2 FRN, though all other denominations from $5 to $100 have undergone extension redesign since the first redesign of the $100 FRN in 1996.
Mint museum
Section 115 covers the provision prohibiting the construction or operation of any Mint museum “without the explicit approval of the Committees on Appropriations of the House of Representatives and the Senate, the House Committee on Financial Services, and the Senate Committee on Banking, Housing and Urban Affairs.”
The Mint does not have any plans to build a museum, according to Tom Jurkowsky, director of the U.S. Mint’s Office of Corporate Communications.
He said many years ago Mint officials discussed the idea of a museum in the ground floor of the Mint headquarters in Washington, D.C. However, in 2002, Congress barred the Mint from using any appropriated funds to construct or operate any museum without approval from the House and Senate financial committees.
BEP and Mint consolidation
Section 116 states that the Treasury, BEP and the Mint cannot use any 2014 appropriations to “consolidate any or all functions” of the BEP and the Mint “without the approval of the House Committee on Financial Services; the Senate Committee on Banking, Housing and Urban Affairs; and the Committees on Appropriations” of the House and Senate.
Discussions about the Mint and the BEP consolidating operations as a cost-saving measure have been proposed and rejected several times since the mid-1990s.
Jurkowsky and a BEP spokeswoman both confirmed there are no current plans to consolidate.