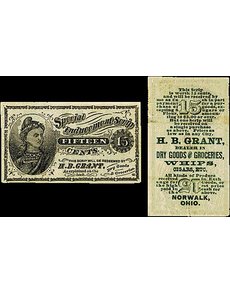 This mid-1870s scrip note has more than a passing resemblance to a 15-cent Fourth Issue fractional currency note then still in circulation. H.B. Grant, a grocery and dry goods dealer in Norwalk, Ohio, issued the scrip, and an unknown source (possibly local) printed it.

The subject of this article is a rare little 15-cent scrip note that was issued sometime in the mid-1870s by an obscure Norwalk, Ohio, merchant.

The first instance of imitations was widespread, occurring in 1873 to 1874 when so-called Tiffany commission scrip was issued by a large number of merchants across the United States.

These notes were popularized by the Buffalo, N.Y., firm of Tiffany Brothers and worked like today’s “cents off coupons.”

In order to capture customers’ attention, the commission scrip vaguely resembled fractional currency that was still in circulation during the mid-1870s.

The notes’ face designs were currency inspired, while the backs contained details of the offer (typically a 5 percent discount on cash purchases) as well as the product lines and location of the issuing merchant.

The notes were often bilingual (usually English and German) depending on the location of the business.

These notes were seen as a means of stimulating business at a time when the nation was just entering a prolonged recession (some suggest a depression) that dragged on from 1873 to 1879.

The desire to increase business was the main reason that the notes offered discounts only on cash purchases and could not be used to pay off credit tabs.

Of course, success bred imitators and that’s where the depicted note enters into the picture.

Issued by H.B. Grant, a grocery and dry goods dealer in Norwalk, and printed by an unknown source (possibly local), the note has more than a passing resemblance to a 15-cent Fourth Issue fractional currency note then still in circulation.

The back, like the commission scrip notes it mimicked, gave details of the deal and listed the various lines that Grant carried including dry goods, groceries, whips and cigars.

Undoubtedly, Grant went with this note printer instead of the more popular Tiffany Brothers due to price or perhaps convenience.

Collectors have identified several other “just like Tiffany commission scrip” style notes from Ohio and Indiana.

They all make interesting notes to add to your collection of post-Civil War scrip.