Not the expected face 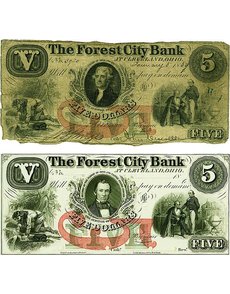 Thomas Jefferson’s portrait appears on the issued obsolete note from the Forest City Bank in Cleveland, Ohio, instead of the unknown local official, who appears on an unissued note proof.

Just about the time you’re convinced that the good stuff doesn’t get listed anymore, wham! There it is — a wonder note!

About a month ago I was plowing through the search I have set up for Ohio and Indiana obsolete notes on eBay when I happened across a $5 note issued by the Forest City Bank of Cleveland in 1859. A scarce note in that it was actually issued (versus a proof), but not quite a trophy note.

Then I took a closer look at the scan in the listing and realized that the “wrong” person, none other than Thomas Jefferson, was peering out at me from the note. Now the listing had my undivided attention. What was this? Some clever alteration? A botched counterfeit? Or (hopefully) a brand new design that has just surfaced?

State records indicate that the Forest City Bank was organized on Sept. 25, 1851, and continued in business successfully until its closing during the course of 1865.

Its reported outstanding circulation in 1860 was around $46,500 and its remaining unissued notes were destroyed on June 12, 1865.

The bank issued a $3,000 bond to secure its remaining outstanding circulation. When it was apparent that redemptions had trailed off to nothing and that this minuscule number of notes could be written off as lost, destroyed or otherwise not available for redemption, the bank’s bond was released on Aug. 27, 1868.

Through the years, this bank’s issues have been known primarily from proofs that were issued during a major design change that occurred in 1853 to 1854. All of the known notes feature a portrait of an unknown male. My suspicion is that he may have been associated with the bank, but that remains an unsolved mystery right now.

I was fortunate enough to win a rather spirited bidding battle for the eBay note and immediately closely examined the note when I received it. The note was clearly genuine, the portrait was perfect; in short the note was completely legitimate in every respect.

What had obviously happened is that a decision was made to change the male portrait from the local personage to the well known likeness of Thomas Jefferson sometime between 1854 and 1859 when this note was issued. We may, however, never know why. Perhaps a death, change in leadership, scandal or some other situation dictated the change.

Now there’s a new mystery to investigate. So it goes with obsolete bank notes!

Wendell Wolka has been a paper money collector and educator for more than 40 years. If you have questions or suggestions, you can reach him by e-mail at purduenut@aol.com, or by mail at Box 1211, Greenwood, IN 46142. Send a self-addressed, stamped envelope if a written response is required.